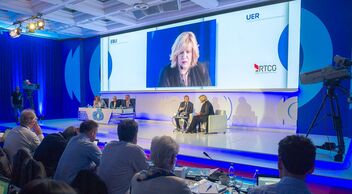 Dunja Mijatović, Representative for Freedom of the Media at the Organization for Security and Co-operation in Europe (OSCE), issued a plea for people to ‘shout about the need for public service media’ at the EBU’s General Assembly in Montenegro on 16 June.

Speaking to RTE veteran journalist Ed Mulhall, Mijatović called on Governments to engage and establish mechanisms whereby broadcasters can enjoy true editorial and financial independence. Many new democracies still did not understand that PSM does not equal state broadcasting and have struggled to make the transition.

Mijatović sees security as the biggest threat to freedoms. Laws are being adopted overnight to protect citizens but: ‘while the role of Government is to make society more secure, that should not be at the expense of human rights and not as a tool to suppress critical voices’.

As the EBU lends its support to a Reporters Without Borders campaign to help protect journalists, Mijatović said that, in many countries which say that they respect democracy and human rights, journalists are still being killed and their murders go unpunished.

PSM needs both more freedom and more protection so it can uphold freedom of expression, provide a safe space for discussion and really deliver a clear message to society.

EBU President Jean-Paul Philippot added that the EBU was here to help Members in crises and that the organisation’s philosophy was to be inclusive as ‘together we can help each other to be better and more distinctive.’