An international conference on public service media (PSM) in Bosnia and Herzegovina has concluded with an agreement that the failure of PSM in the country would be completely unacceptable.

Public service media in Bosnia and Herzegovina (BiH) is under threat of imminent collapse due to insufficient and unsustainable funding and the authorities’ inability to make the necessary reforms to the media law.

More than 100 participants from parliament, government, regulatory authorities, the media, the international community and the civil sector met in Sarajevo to discuss the importance of PSM.

Patrick Penninckx from the Council of Europe said that national public service media was ‘not a luxury but an essential’ especially in times of populism and fake news when you ‘need a voice that can stand up and speak out freely’.

Addressing the conference, MEP and Rapporteur for Bosnia and Herzegovina Christian Preda added: “To put it simply, the idea of a future member state of the EU without public service media is unthinkable. It is as much an issue of European law as it is an issue pertaining to the democratic character of the country.”

The conference concluded that PSM in BiH was particularly important for building and reinforcing democracy and European values and that it was indispensable for building a national identity and social cohesion.

EBU Board Member Marko Filli said "The EBU will further support PSM in BiH. All efforts now should be oriented towards ensuring continuation of the existence of PSM, because it is not only important for BiH, but for the whole region."

Deltenre concluded: "We were encouraged to see there was huge interest in the discussions and that there is broad understanding among politicians, media and the wider industry about the importance of national public service broadcasting. Some members of parliament have personally promised to help promote possible solutions.

“We have discussed different models in Europe and it is now up to the political leadership of BiH to implement the recommendations that were jointly formulated by participants at the event."

The conference, in the offices of national broadcaster BHRT, was organised by the EBU, BHRT, the Bosnia and Herzegovina Journalist Association, the Council of Europe, the Office of the OSCE Representative of Freedom of the Media, the European Federation of Journalists and the South East Europe Media Organisation.

The conference recommendations will be sent to all relevant authorities in BiH and international partners on 19th June 2017. 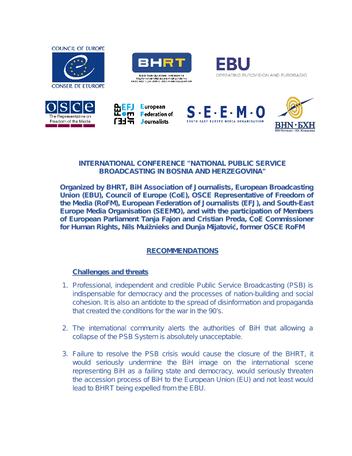 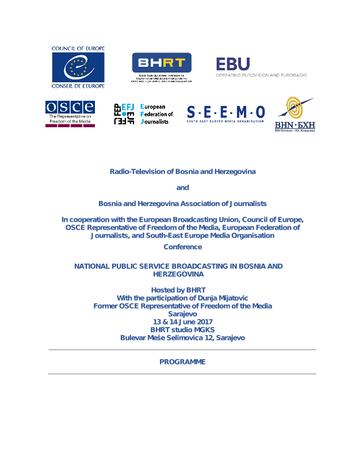