The European Broadcasting Union (EBU), together with other expert members of the EU High Level Group on Fake News and Disinformation, delivered today (12 March) a report on fake news and online disinformation requesting the creation of a new framework to address the role of online platforms in today's news media environment.

A set of measures to fight online disinformation is outlined in the report, including the creation of a multi-stakeholder Coalition and Code of Practice, to follow up on the High Level Group's work.

In the report, the High Level Group defines a set of 10 guiding principles to shape the future work of a Coalition, composed of online platforms, news media organizations (including press and broadcasters) and civil society organizations. The purpose of the Coalition would be to elaborate, on the basis of these 10 principles, a Code of Practice setting out concrete measures to fight fake news and disinformation, which should be implemented as of January 2019.

The EBU considers that a number of policy initiatives need to be undertaken or strengthened to address the root causes of the online 'Information disorder', without undermining the core principles of freedom of expression and media pluralism. Key measures should target giving citizens easy access to high quality content provided by the professional news media and public service media in particular, increasing the transparency of social media news ranking systems, ensuring that fake news articles do not generate revenues for their creators, and boosting media literacy.

EBU Director General Noel Curran said: "Public service media is in the front line in the fight against fake news and online disinformation.  Disinformation is severely undermining citizens' trust in the media at large. To reverse this worrying trend, high quality researched and unbiased news content such as that of Public Service Media needs to be prominent on social networks and online platforms, which are key intermediaries in today's digital media environment."

SVT (Sweden) Director General Hanna Stjärne said: "Ethical guidelines set out in a Code of Practice addressing the role of international digital platforms are clearly needed. Media companies in Sweden have long-term guidelines that are followed up in an open and transparent process; a similar public framework does not exist for international platforms. The High Level Group has now developed a framework for a Code of Practices and a process for putting it into practice."

Juraj Polak, Senior Legal Advisor at RTVS (Slovakia) said: "The adoption of the final report needs to be acknowledged as the important step within the continuous and focused approach towards effective and inclusive solutions. Due to the complexity of the matter at stake only a joint effort may lead to success."

On a similar topic, the EBU welcomes the adoption of the Recommendation on the roles and responsibilities of internet intermediaries, which was adopted on 7 March by the Council of Europe. This new standard-setting instrument provides useful guidance to all relevant actors faced with the task of protecting and respecting human rights in the digital environment. It examines the management of the flow of information by internet intermediaries, and recommends measures to strengthen the transparency and accountability of these actors and to provide effective remedies for users, content providers and other affected parties. The EBU believes that this Recommendation should be fully incorporated in future reflections at EU level on fighting disinformation. 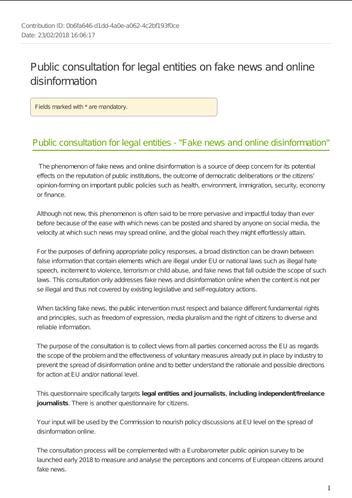