The EBU is concerned by proposed changes to Lithuanian National Radio and Television's (LRT) governance including the appointment of members of the governing bodies and supervision.

The changes have been proposed by an ad hoc parliamentary investigative commission on the operations of LRT.

The establishment of this parliamentary commission has been contested at the Constitutional Court and the case is still pending. In this situation, the EBU believes that it would be better to wait for the Court decision or at least not adopt far-reaching measures solely on the basis of the findings of the investigative commission.

The EBU is particularly concerned about the proposed changes to the appointment of LRT Council members, which would be made subject to accelerated and quasi continuous renewal; the appointment procedures for the new Board, which appear to lack safeguards against political influence; and the introduction of an unprecedented three-tier control system as regards the fulfilment of the requirements of the LRT Law, such as the public service remit, with overlapping powers of the Board, the Council and the Commission.

It is of crucial importance that the body entrusted with the supervision of LRT is truly independent from political powers and assumes the role of guaranteeing the editorial independence of public service media as provided by European standards.

In view of the importance of the governance system for the independence and democratic role of public service media, the EBU urges Parliament not to rush through far-reaching changes without broad public debate and a proper impact assessment.

It is also important to seek a broad political consensus on any changes to the governance system so as to prevent a vicious circle where the system is changed after every election and causes instability in the management and operation of public service media. 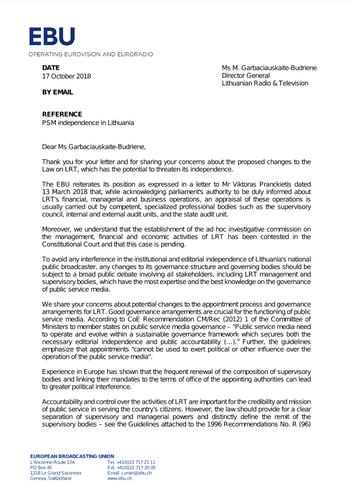 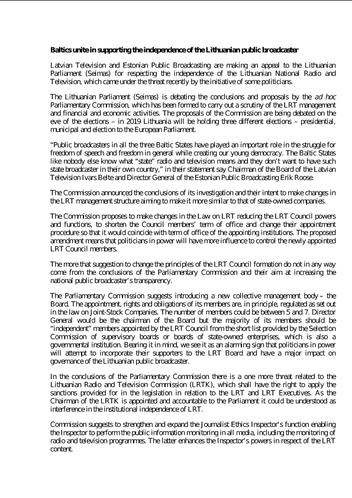