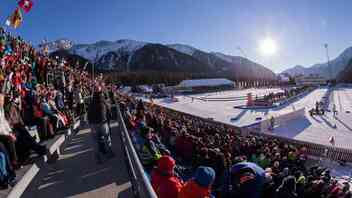 This year’s IBU Biathlon World Championships, taking place at the Südtirol Arena Alto Adige in Antholz Anterselva, Italy on 12 to 23 February, will be broadcast live by at least 18 Members of the EBU in Europe, plus a range of other broadcasters worldwide.

In total, more than 330 hours of live coverage are scheduled to appear via linear TV, with most broadcasters also offering supplementary coverage on their digital platforms. These figures represent approximately a 10-per-cent increase on the level of coverage of last year’s IBU World Championships held in Östersund, Sweden, thanks to the addition of two EBU Members: Iceland’s RUV and RAI, in the host country of Italy.

The line-up of EBU Members and other broadcasters guarantees free-to-air coverage and wide visibility for the sport of biathlon across Europe and around the world.

In the men’s World Cup, meanwhile, the challenge will be to compete with athletes from neighbouring France, who are dominating this year’s series, led by legendary biathlete Martin Fourcade in first position, followed by Quentin Fillon Maillet in second position and Simon Desthieux, who is lying fourth.

Eurovision Services, an EBU Company, is the host broadcaster of the IBU Biathlon World Championships and is the International Biathlon Union’s service provider for worldwide distribution of all of its events.

Stefan Kuerten, director, Eurovision Sport, said: “Eurovision Sport is very proud to have partnered with the IBU for over 25 years. Working closely together we have seen the sport grow to reach millions of people across Europe through EBU Member broadcasters. Worldwide interest also continues to grow with Korea, China and the USA now offering content on a wide variety of platforms to the global biathlon fanbase.

“Bringing sport to the people and the people to sport is what we all do best and audiences are in for a treat with 10 days of the highest level sporting action during this event.”