The Drama Initiative – a small revolution in PSM drama 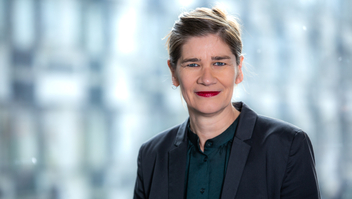 “We have to decide as Public Service Media (PSM), who are our partners in this world? And the answer is obvious. It should be us – PSM - working together as first-choice partners. PSM should be Plan A - always.”

Drama is a shared experience; it brings together audiences across all demographics and helps make sense of our world. It is a vitally important genre for PSM and the EBU is committed to enabling its Members to provide dramatic content to as wide an audience as possible, including younger audiences.

But at a time when budgets are squeezed, decision-making is time consuming and competition is fierce – and all in the context of a worldwide pandemic – then delivering on that commitment can be challenging at best.

Enter the EBU’s Drama Initiative – a series of projects that harness the best of PSM qualities – collaboration, creativity and strong networks – to make great European drama available to all our Members and their audiences.

Elly Vervloet is coordinator for the Drama Initiative and International Drama Executive at VRT. She has worked at VRT, first in news and production, then more recently in drama co-production for over 26 years. Her passion for drama was ignited as a child and has stayed with her throughout her broadcasting career.

In this interview, she outlines why drama is a key genre for PSM; how the Drama Initiative project is necessary for PSM and why the initiative can happily co-exist with other platforms.

“Drama is vitally important to PSM. It’s a great way to tell stories with a relevance for society. It's entertaining and people need entertainment – especially now. But it also has societal relevance, which is important for PSM because that’s the thing that makes us stand out.

“Drama appeals to younger audiences – something we PSM all struggle with – by reflecting their experiences back to them. And it’s an important driver too – great drama attracts people to platforms, makes them stay there and come back.”

How the Drama Initiative works:

The Drama Initiative is about enabling early access to high-quality drama content; allowing European PSM executives a first look at projects in development and giving them the opportunity to co-produce and/or to pre-buy – which is financially expedient, as well as delivering on a need for new, ambitious drama content.

For Elly, the drama initiative is the right project at the right time and makes a strong European statement, because it has collaboration at its core. And, because drama – in an ever-more crowded production market - is expensive to make, collaboration is key.

“The EBU contacted me because my role at VRT is about building international collaboration, getting our projects financed and working together to create a network, so it was quite obvious for me to do this!

“We call it a co-production network but it doesn't have to be co-production, it's essentially a network of PSM; EBU Members who get to know each other, who know what they are making and where we can easily say, "Oh, this is a nice proposal from Sweden or from UK or from Belgium and I would like to step into this ASAP."

“What we've created is an exclusive window for EBU Members to have a fresh look at very good projects and before a distributor or a platform is on board. It is a very direct and transparent way of working, without having to pay a distribution fee or cost.

“The EBU steps out of the process, as soon as negotiations between the leading broadcaster, the producer and interested parties start, so it's really about facilitating, connecting people and making a platform available for broadcasters to show their material. So, it has a lot of advantages and it's not too administrative, you know? There’s no need to put together an extensive dossier.”

It’s not about going to war with commercial platforms:

Elly makes the important point that the Drama Initiative is not an initiative against platforms – on the contrary.

“Platforms have been very important in challenging us to become better, to become faster, and to make better drama. The Drama Initiative is not a statement of war.

“For me, it’s a way of co-existing. It's looking for alternatives, and it's just another way of collaborating. So, it's not against the platforms, but something that can co-exist with them.

“It's the same for distributors. I imagine that some distributors don't like to see this happen because then they have to work with carve-outs and the territories available to sell become smaller - though, arguably, it shows the sales potential when a series is co-produced by one or more international partners. Overall it’s something we have to do and we have to find a way to deal with distributors and platforms.”

Elly expects the impact of the Drama Initiative to be wide-ranging on a number of levels. To increase commissions, to provide more varied content and to be financially expedient for PSM to be involved in it.

“Getting projects financed is key - but it's also a matter of exchanging content, skills and creative insights by working together. Ultimately it’s about increasing the amount of content that we have access to.

“It's frustrating that sometimes it's PSM who believe in a series from the start, making it an international success by buying the first season(s). And then, all of a sudden, this same successful series is sold to a global platform and, therefore, is no longer accessible to those same PSM who believed in it from the beginning.

“So, this triggered discussions prior to the formalization of the Drama Initiative, where we realized we needed to do something, because if we didn’t, it would be very difficult for us to obtain high quality drama series’ – and keep hold of them.

“For me, we have to decide as PSM, who are our partners in this world? And the answer is obvious! It should be us – PSM - working together as first-choice partners. And if that doesn't work, then we can approach other platforms. But PSM should be Plan A - always.

“I think the EBU and its network has great potential to make it work. And I believe Members feel there’s something happening; something very concrete, valuable, something that works.

"I'm certainly very curious because everybody's always saying, ‘We need to collaborate more, we need to do this, and we need to do that!’ So, here's an offer to do it and I'm interested to see whether broadcasters have the intention to work together more. It’s early days. But the signs are positive.”

The effect of COVID-19

The Drama Initiative is currently operating against the backdrop of the COVID-19 crisis. For Elly, the worldwide pandemic, while throwing up obvious obstacles - not least the constraints on face- to-face contact and, of course, the creation of a whole new set of urgent priorities for broadcasters - arguably it also creates a case for more drama to be made available for and across PSM outlets – and some of it will be about the current pandemic.

“VRT is currently developing a new series called ARCADIA, together with the Dutch public broadcaster KRO-NCRV and the independent production company, jonnydepony.

“When the production company created the idea one-and-a-half years ago, they pitched it to us as “after the outbreak of a deadly virus, a new society is created…” Isn’t that something? Last year we pitched it within the EBU network and I’m excited to say that we’re closing talks with ARD to step in as co-producer as well. So this will be a European co-production, VRT, KRO-NCRV, ARD and JDP. How is that for collaboration between PSM?!

“I should emphasize that ARCADIA isn’t about a deadly virus as such. It tells the story of a new society created after the virus, with new rules to follow, in order that people stay healthy and productive. Overall Arcadia asks questions: in what kind of society do we want to live? Do we want a society where people live together in solidarity, or do we want a society where everyone gets what they’re entitled to: strong people get more, vulnerable people a bit less? And what if less turns out to be way too little? Do you want to measure, or do you want to share?

“And here we are, some of these questions are being asked already. But it makes the point about drama and its relevance for society.”