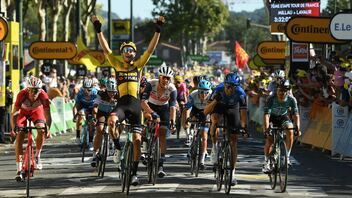 EBU Members are posting impressive live free-to-air viewing figures across Europe for their coverage of this year’s Tour de France, which entered its second week on Tuesday 8 September after Monday’s rest day.

Any fears that viewing might be adversely affected by the race’s enforced postponement in the international sporting calendar from its usual dates in July because of the COVID-19 pandemic crisis have been quashed by the encouraging figures.

The interim figures follow an exciting and unpredictable first nine stages of this year’s 21-stage Tour, with the top seven riders separated by a gap of just 44 seconds by the end of Thursday’s stage, meaning that any one of this group, at least, could still take the 2020 overall win on Paris’ Champs Élysées on Sunday 20 September.

Frédéric Sanz, Head of Cycling, Eurovision Sport, said: “In this unusual cycling season (to say the least), we are thrilled by some great ratings from EBU Members for the first nine stages of the Tour de France 2020. We were concerned that the switch of the race from its traditional July dates to take place mainly in September might have some negative effects on the viewership. However, the Tour de France has continued its long-track record of popularity, with the distribution provided by EBU Members together with Eurosport proving once again its ability to reach the widest possible audience across Europe.”

Julien Goupil, Media Director, A.S.O. (rights owner of the Tour de France) said: “We first want to say thank you to the EBU, its Members and Eurosport International, whose support has been crucial to deliver a postponed Tour in September. We are grateful for the encouraging viewership figures seen across Europe over the first nine stages of the Tour, both on free linear television and digital platforms, especially as this is the first time that the event is taking place so late in the season.

“As one of the first sports events of international magnitude to be back on screens since March, and with free-to-air exposure as a key concern, these metrics reinforce the idea that the Tour is much more than just a date. We feel excited about our recently-renewed agreement with the EBU until 2025, an agreement that shows our commitment to deliver the best of cycling to the greatest number of people in Europe.”