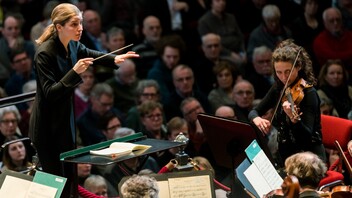 An independent report commissioned by the EBU from Oxford Economics* calculates that the economic impact of EBU Members music radio activity contributed in excess of €3.1 billion to Europe’s GDP and supported over 50,000 jobs in 2018.

The Economic Impact of Public Radio’s Music Activities demonstrates the critical importance of public radio music output to economies. A third of the €3.1 billion spend (over €1 billion) is direct impact – mainly money invested in payroll costs, with some 17,700 staff directly employed in music radio operations, with a third employed as musicians in orchestras, choirs and ensembles. The activities also support over 50,000 total jobs when considering suppliers throughout the value chain. For every job in these music radio operations, a further two roles are supported elsewhere in the European economy.

In addition, every euro invested directly in music radio activities generates €1.90 in other sectors. Together, these operations and their suppliers account for almost one fifth of all jobs and GDP in the EU-27’s music and radio services sector.

Noel Curran, Director General, EBU, said, “Public service media have always played an integral role in enabling audiences to access a vast range of high-quality musical output through their network of radio stations, but now we have quantifiable evidence that this cultural contribution is also an economic one – worth billions in real terms. EBU Member public radio stations are driving investment, driving growth, driving job creation and contributing to a healthy supply chain of a range of other businesses and economic activities.”

A clear majority of this activity takes place within the EU-27. Across those countries, 38 operations run 170 national and international radio channels, 232 regional and local channels, 226 online streams, 40 orchestras, 34 choirs, and 10 ensembles. These organizations employed some 12,320 individuals in 2018, associated with €853 million of direct GDP. This includes 4,320 musicians engaged in orchestras, choirs, and ensembles, directly generating €294 million of GDP.

Noel Curran added, “Music enriches lives and brings together millions of people. But we’re now seeing predictions that the entire creative industry sector will be hit hard by the impact of COVID-19. Without support and strategies for preserving it, we will be witnessing both a cultural catastrophe and an economic one. Music radio and the wider creative sector are the industries of the future, where jobs are least likely to be lost to automation, and integral to cultural identities of citizens everywhere. We need them more than ever.”

Doug Godden, Lead Economist at Oxford Economics and author of the report, said: “This study demonstrates the importance of public service music radio both to the music industry and to the wider European economy.

“For the music sector, the commitment of public service media to live events is a key part of the story. A majority of the 60 organizations covered by the study run one or more orchestras, choirs or ensembles, boosting the value of their own music-related output. In addition, they broadcast many other live events, as well as recorded music, generating significant income streams for those musicians and the associated industry.

“Their spending on wages and supplies also supports a very wide range of activities beyond the music and radio services sector. In fact, taking supply chain linkages and wage-funded staff expenditure into account, the total number of European jobs supported by public service music radio is three times the number of individuals working directly for the operations concerned.”

Find out all the details at country-level, EU-level and the breakdown for music ensembles in The Economic Impact of Public Radio’s Music Activities report. The report is part of the EBU’s wider Contribution to Society initiative, that provides a wide range of research and data to demonstrate the value public service media delivers to society.

*The report was commissioned and independently produced by Oxford Economics, a world leading consultancy.