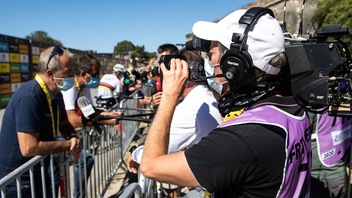 This year’s Tour de France was completed safely, providing great sporting action and producing some of the best TV viewing figures of the last five years despite stringent COVID-19 restrictions and the postponement of the race to an unfamiliar slot in September, EBU Members were told today.

Members were listening to a virtual presentation on COVID-19 best practice delivered by Julien Goupil, Media Director at A.S.O., the Tour de France organizer, and by Laurent-Eric Le Lay, Sports Director at France Télévisions, the EBU Member which produces the international feed for the race, as well as televising it in France. The discussion was moderated by Eurovision Sport’s own Stefano Bernabino.

Organizers had two main objectives, Goupil said: bringing the three-week race safely to its finish on Paris’ Champs Champs-Élysées on the rescheduled date of 20 September; and ensuring that the TV signal was distributed globally. “We had to re-think totally the organization” to achieve this, he added, complimenting EBU Members on their contribution. “It has been a tough time, but the EBU itself and all EBU Members were supportive of the Tour de France. What we have put in place is teamwork.”

A.S.O., together with the authorities and all stakeholders of cycling, created a ‘sanitary protocol’ based on three key principles:

As part of these measures, Goupil said, 700,000 masks were distributed, 3,500 coronavirus tests were conducted and a dedicated COVID-19 team was on site with a mobile laboratory.

On the production side, France Télévisions’ precautions involved preparing a ‘Plan B for everything’, including, for example, the possibility that the TV director himself might test positive for the virus, according to Le Lay. The broadcaster also drastically cut the number of its production staff that were present on site, instead opting to produce most of its domestic coverage from its studios in Paris, even though, he admitted, this was “not an easy decision for the French audience.”

In total, the number of media representatives attending the race was down by 40 per cent, compared to previous editions, said Goupil, while restrictions on access to the area behind the finish line meant that circulation was much more “fluid” than usual. “The idea is not to isolate the riders, but there are some learnings that will continue,” he said.

Le Lay cautioned: “The problem that we have today is that it is very difficult to create a direct relationship with athletes. There is a potential problem if we cannot restore that.” Goupil agreed, saying that the Tour de France “has to remain popular and accessible.”

The discussion followed the EBU’s recent publication of its COVID-19 Report: ‘Public Service Media: Supporting Society Through Coronavirus’, which found that Public Service Media reacted with impressive speed and creativity to the lockdown.