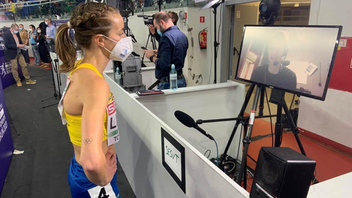 The number of live TV hours viewed during coverage of last week’s European Athletics Indoor Championships in Torun, Poland jumped by an average of nearly 20% in nine key European TV markets, compared with the previous edition, which was held in Glasgow, UK in 2019.

Meanwhile, EBU Members took advantage of several technology innovations aimed at making it easier for them to interact remotely with athletes, with governing body European Athletics and with Eurovision Sport during the continuing lockdown restrictions.These included a pioneering Virtual Media Centre.

In all, 32 TV channels broadcast the championships, which took place on 4 to 7 March, with many national TV audiences having something to cheer as medals were won by athletes from 23 of the competing nations.

Continuing Covid restrictions gave Eurovision Sport and EBU Members the opportunity to introduce several technology innovations that enabled broadcasters to maintain unilateral production and interaction with athletes, while having no staff on site.

Franck Choquard, Eurovision Sport’s Head of Content & Platforms, said: ‘With all of the efforts being invested by European Athletics and the Local Organizing Committee to deliver safely an international event of this scale for the first time in months, it was our duty at Eurovision Sport to deliver innovative solutions for increasing the reach and visibility on all platforms.

‘We are very proud of our Members’ coverage and the way they exploited our new solutions to increase the exposure of the event. The EBU and its members are committed to using digital transformation to deliver higher value to all our partners’.

In 2018, the EBU and European Athletics renewed their worldwide media rights contract, taking the partnership, which began in 1981, through to the end of 2027.
The agreement covers the worldwide television and radio rights for European Athletics’ major events from 2020 to 2023 and from 2024 to 2027. This includes the flagship European Athletics Championships in 2022, 2024 and 2026.