New rules for online platforms: Delphine Ernotte and Members of the European Parliament came together to discuss 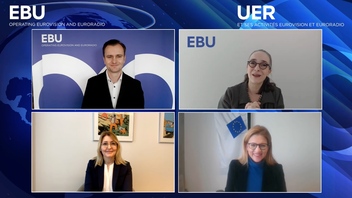 How the EU regulates online platform behaviour is one of the most scrutinized topics of the moment. The proposed EU Digital Services Act (DSA) and Digital Markets Act (DMA) aim to shape the next chapter of the Internet. As media organizations, our members are rapidly innovating online and the Acts will have a significant impact on how online audiences engage with them.

The DMA and the DSA are making their way through the legislative process and are now in the hands of the European Parliament. At this crucial point, we organized an event on 11 March that brought two of the key Members of the European Parliament — Christel Schaldemose, rapporteur for the DSA, and Stéphanie Yon-Courtin, Vice-Chair of the Economic and Monetary Affairs Committee — together with new EBU President, Delphine Ernotte Cunci, CEO of France Télévisions. The discussion was moderated by Wouter Gekiere, Head of EBU's Brussels office.

Before a large online audience from the media sector and the EU policy community, the three speakers had a substantial exchange on what the two Acts could deliver for Europe’s media and audiences.  Among the many issues discussed — from the role of platforms in tackling illegal content, the relationship with sectorial media laws to future enforcement of the Acts — here are just a few of the highlights.

The future of media is at stake

Delphine Ernotte Cunci kicked off the discussions by stating that Europe’s media, including public service media (PSM), bring tremendous value at two levels: economic and democratic. Each year, PSM invest around 20 billion € in content across television, radio and digital. EBU members also make up Europe’s largest newsroom, employing over 40,000 journalists. The trusted and objective news and information they provide are critical to protect the health of democracies. But with 72% of online users accessing news not through the original source but through a side door including social networks or search, online platforms have an enormous impact on the media sector. The platforms have profound influence and they do not always play fair. Christel. Schaldemose and Stéphanie Yon-Courtin emphasised the need to protect Europe’s free and independent media. And while this is not solely up to the DSA and the DMA, they can play a significant role.

While the media sector is subject to legislation and high standards regarding the content it puts online, it regularly finds itself being edited a second time by platforms. Delphine Ernotte Cunci put forward the EBU view that it is not acceptable that a private company removes, without notice or adequate explanation, media’s content because it somehow doesn’t fit its own standards. Christel Schaldemose believes that platforms should not take down any content for which media has already applied their own editorial responsibility. “They should not go in and regulate the media”.

Exacerbating the problem is the difficulty in communicating problems to platforms: they offer very poor channels of communication to their users.  Regulating this can be difficult, because we should not reopen either the copyright directive nor the AVMSD in the DSA, but solutions should be found to improve user rights for all – from businesses to individual consumers — said Christel Schaldemose, including giving adequate notice or a warning about takedown of content, and being clear about how content violates terms and conditions. She also stated that online platforms have become public spaces and they must have certain obligations to guarantee rights for users. A concrete idea put forward by Stéphanie Yon-Courtin is to put specific mechanisms in place for user complaints and for arbitration.

The DMA must be an efficient and future-proof tool, according to Stéphanie Yon-Courtin. Her aim is that the DMA will establish clear and effective rules that lay out do’s and don’ts that will avoid antitrust cases that could continue for years. Digital markets must remain fair and competitive and the growing power of a handful of private companies must be managed. Ensuring that the media sector remains competitive is not only about its economic importance but also about safeguarding media pluralism and high quality, trusted journalism. Practices that will certainly be targeted include self-preferencing, where online platforms treat their own services more favourably than those of their competitors. This restricts choice for users and distorts competition. The DMA will need to mitigate self-preferencing by obliging platforms to adjust their algorithms. Both Stéphanie Yon-Courtin and Christel Schaldemose also spoke about the need to address how platforms use data belonging to their customers and users. This issue is very important to the EBU — Delphine Ernotte Cunci pointed out that platforms do not give our members access to the data about their own content and services.

This valuable discussion shows that the problems caused in the media sector by online platforms are well recognized and understood by political decision makers. The two invited MEPs are determined for the European Parliament to ensure that the DSA and the DMA bring about a solid framework for innovation, fair competition, opinion-making and free speech. Their early thoughts on specific amendments to the Acts are – importantly — both ambitious and enforceable. From our perspective, our President stated that she was hopeful for the development of the DSA and DMA, and she encouraged all media – public and private – to come together to support the work of political leaders as the legislation takes shape.

Read more about the EBU’s views on the DSA and DMA.