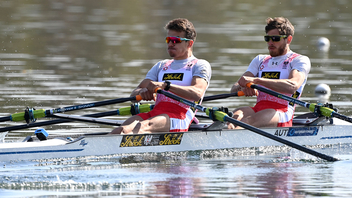 EBU Members and other broadcasters are embracing the imminent return of the European Championships of various sports with their plans for comprehensive coverage, continuing with the European Rowing Championships in Varese, Italy.

The broadcasters have welcomed a stabilisation of the international sporting calendar this year, after disruption last year as a result of the COVID-19 pandemic.

Their plans follow a big rise in the number of live TV hours viewed during coverage of last month’s European Athletics Indoor Championships in Torun, Poland.

A total of 21 European broadcasters are showing this year’s European Rowing Championships (19 EBU Members and two non-Members), compared with 13 for last year’s event in Poznan, Poland, which was postponed from June to October 2020, and 15 for the 2016 edition in Brandenburg, Germany, the last occasion on which the championships took place in an Olympic year.

This year’s event begins today and runs until 11 April.

Meanwhile, 17 European broadcasters have already signed up to cover the European Championships in Artistic Gymnastics in Basel, Switzerland, with more expected to commit to the event, which is scheduled for 21 to 25 April.

This figure is already an increase on the number of broadcasters that covered the event in Mersin, Turkey last year (both the men’s and women’s editions were rescheduled to December 2020 because of the Covid pandemic), and in Bern, Switzerland in the Olympic year of 2016.

Interest from broadcasters is also strong for the European Aquatics Championships, postponed from 2020, and now due to take place in Budapest, Hungary on 10 to 23 May.
Andreas Aristodemou, Head of Summer Sports Rights at Eurovision Sport, said: “Once again our Members and partner broadcasters are embracing sport in an unparalleled way. More broadcasters than ever are committing to broadcast these events and we are confident that audiences for these European Championships will grow following many months of inactivity due to the ongoing pandemic.”

In December last year Eurovision Sport and World Rowing agreed a four-year renewal of their European media rights agreement, beginning this year and running until 2024.

The agreement, covering Europe, the Middle East and North Africa, extended a partnership dating back to the early 1980s.

2021 is also the first year of the latest agreement between Eurovision Sport and LEN, the European Aquatics governing body, which runs until 2024.