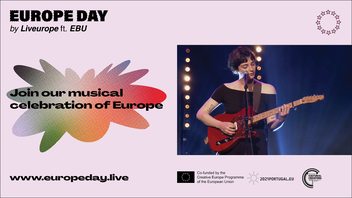 To mark Europe Day on 9 May, Liveurope and the European Broadcasting Union (EBU) are joining forces to promote some of Europe’s most promising artists through a series of showcases recorded at iconic European live music venues. The campaign comes after a year in which the COVID-19 crisis has seriously impacted the live music sector.

As well as providing a platform for new talent, the initiative will highlight the important role concert halls play in developing artists and how the future of European music is shaped in the process. But with their influence and reach curtailed due to pandemic closures, that future has been significantly undermined.

The initiative is supported by the Creative Europe Programme of the European Commission and has the official endorsement of the Portuguese Presidency of the Council of the European Union and the Cultural Creators Friendship Group in the European Parliament.

“Congratulations to Liveurope, EBU and the 15 young and talented artists for coming together to celebrate Europe Day. In Europe, we can all be proud of what we stand for: solidarity, freedom, diversity, cooperation that knows no border. By being who you are, and doing what you do, together you embody precisely that, our European way of life. Be assured that you can count on us. We have a common purpose, we are stronger together as a union, and we have you, your talent, your creativity, your energy.” - Margaritis Schinas, European Commission Vice-President for Promoting our European Way of Life.

There will be 15 participating Liveurope venues including Melkweg, a concert and cultural centre in Amsterdam, housed in a former dairy; Village Underground’s cool warehouse venue in Shoreditch, London; and the A38 ship in Budapest, located on the River Danube. Each venue has recorded an exclusive mini-showcase with a promising local artist that will be made available for broadcast to a number of EBU public radio stations across Europe and worldwide throughout May.

“On a normal year, we have the chance to provide stages to European artists on the rise, and we can benefit from financial incentives from Liveurope to compensate for the risk it represents. Now that the doors of our venues are closed, we have been striving to continue providing stages to new talent across borders and we are immensely proud to count on the support of public service radios to do so with this campaign” - Sten Ove Toft, BLÅ (Norway).

Fifteen artists are on board including the GRAMMY nominee Turkish-Dutch band Altın Gün; Spanish lockdown musical sensation Stay Homas; Hungarian electro-duo Belau; and the explosive Norwegian act Pom Poko. For them, the initiative is an opportunity to reach new and, potentially, global audiences. For audiences, there is the promise of fresh sounds and new discoveries. While for those live music venues that have been closed for a year or more, it is an opportunity to underline the importance of live music to helping see the way out of the crisis.

“In our everyday work, we see how music has the power to bring people together and to build bridges between cultures and territories from all over the continent.  At a time when the pandemic has pushed forward social isolation, we believe culture can be a vehicle to regenerate enthusiasm for the future, especially among new generations. And this initiative is a prime example of that.” – adds Elise Phamgia, Liveurope’s coordinator.

Each artist’s showcase will consist of one or two songs for broadcast by EBU public radio stations. Broadcasters can use the content anytime from 2 May though the campaign will focus on 9 May – Europe Day – a date that traditionally promotes cross-border cooperation and collaboration across the continent.

Edita Kudláčová, Head of Radio, EBU, says “Live music venues create unforgettable moments. Artists need to perform. For audiences, there is no substitute for the emotional reaction when experiencing music live. Yet for over a year now, music venues have been darkened spaces, closed to public and artists alike. The impact of the pandemic on these creative spaces has been devastating. Particularly so for new talent who rely on live performance not only as a way of boosting income but developing their fanbase early in their careers and providing vital experience of playing ‘live’. This initiative is a reminder of the importance of venues to artists and audiences – and to the creative sector as a whole. It is imperative that we support them.”

Liveurope is an initiative supporting concert venues in their efforts to promote up-and-coming European artists. The platform works as a quality label awarded to live music venues committing to European diversity. The objective of Liveurope is to boost the programming of young European acts across the continent and help them reach new audiences. Established in 2014, the Liveurope platform is the first initiative of its kind in Europe.