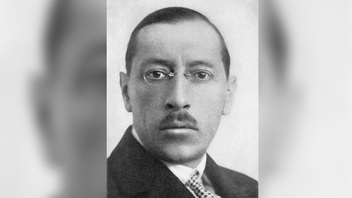 Often described as a "musical earthquake", the premiere of Igor Stravinsky's ballet The Rite of Spring in Paris in May 1913 rocked the music world as few performances before, or indeed since. Now, for the 50th anniversary year of the composer's death, the Belgian broadcaster RTBF Musiq3 has made available to the EBU community a five-part 30-minute series in French entitled "Le printemps selon Igor" (Spring according to Igor). In addition to the celebrated French pianist Alexandre Tharaud, who plays the legendary ballet dancer Vaslav Nijinsky, the series features Thierry Hellin in the role of Igor Stravinsky and Stéphanie Van Vyve as Elisa Miller. More details can be found on the dedicated project page.

Igor Stravinsky takes us behind the scenes into the creative process around The Rite of Spring, a work whose novelty triggered one of the most famous scandals in music history.  With him, we are caught up in the excitement of the Ballets Russes and the vision of Serge Diaghilev, determined to transform the world of classical dance. Along the way, Vaslav Nijinsky, whose dancing stunned the entire world, shares with us pages from his Journal. We also meet Gabrielle Chanel, alias Coco, in the midst of taking Paris by storm, while pursuing a torrid love affair with Igor Stravinsky.

Author and producer Axelle Thiry of RTBF Musiq3 discusses how she went about taking radio listeners back to one of the most creative and exciting periods in music history.

Q: In this series, Alexandre Tharaud lends his voice to the part of Vaslav Nijinsky. Why choose a pianist, and not an actor, for this role, and why Alexandre Tharaud in particular? Tell us about how you at RTBF worked with him.

AT: It seemed an obvious choice to offer Alexandre Tharaud the part of Vaslav Nijinsky. I was looking for someone to play this outstanding dancer, who brings pure, unadulterated feelings to the series. I listened to different actors’ voices, but one day, as I was driving through the countryside and a beautiful snow-covered landscape, I heard an interview of a pianist on the radio. Right away, I thought: “That’s the one!” I had found my Nijinsky for the series. The voice was of someone both sensitive and sure of himself. It was a resonant voice, and there was also this pureness that corresponds so well to Nijinsky.

I waited until the end of the broadcast and found out that it was the voice of Alexandre Tharaud. He was delighted to do this project, and he made a very open, honest Vaslav Nijinsky. Afterwards, Alexandre offered to do other series. Since then, he has played Fryderyk Chopin, and more recently, Maurice Ravel in another radio series. Not only that, he really invests himself in these projects. It’s thanks to him that I could get Dominique Blanc from the Comédie Française to lend her voice to George Sand. Alexandre has also recorded music especially for the series where he was Chopin and Ravel. Often, he looks for a piano that has just the right sound for the series, and we get together in Paris to record passages that follow the episodes. He also arranges to participate in the press conferences on the series, even in the middle of a day of rehearsals. Not only is Alexandre extremely talented, he has great generosity of spirit.

Q: As a musician, Alexandre Tharaud undoubtedly relates to Stravinsky differently from the people who play the other two roles. What was it like to record the series with him? How did he engage with this kind of work?

AT: The recording went very well. Since Alexandre experiences the artistic and music world from the inside, this makes the interpretation of his character deep and genuine. Through the music of the composers whom he plays, he has entered into their innermost and extraordinarily rich world. It’s as if he carried all these musical voyages and horizons within himself and brought them along with him to the studio. That gives great authenticity to his performance. From the moment we began, Alexandre recited Nijinsky’s words as if they were his own. He seemed to be living what he was saying. Perhaps that’s what is most important: the person reading the part must feel these things with sincerity while giving free rein to his own sensitivity. That then allows listeners to feel it as well.

Q: The journalist Elisa Miller is a fictitious character. Why did you create her and what did you see as her role in the story?

AT: I invented her in order to bring a woman’s sensitivity to this story, and also to provide an outside narrator of the events taking place. She makes it possible to see the story from another angle. For instance, we first experience the scandal of The Rite of Spring’s opening night from Igor Stravinsky’s viewpoint, and then we see the evening through the eyes of an outside observer, a journalist. That allows us to show how the same event can be viewed in very different ways. I used her as an imaginary journalist in order to have a character who could tell us what was happening and help move the action along. I wanted her to be an admirer and a friend of Igor Stravinsky because in the end, the essence of this series comes from the characters’ feelings, whether it is Igor Stravinsky, Vaslav Nijinsky or this fictitious Elisa Miller.

Q: How did you decide what musical excerpts to include, aside from the obvious ones in Stravinsky’s repertory?

AT: First and foremost, the choice was dictated by the story. When we mention the premiere of certain works, such as Prélude à l’après-midi d’un faune by Claude Debussy, that’s the music you hear. But you also have to find the passage or the piece of music that goes along with the atmosphere being described. So for example, when Igor Stravinsky finds himself trapped in a freight car with a bull, I looked for music that would create the greatest suspense possible. Or again, when Vaslav Nijinsky leaps into the air before a dumbfounded audience, I tried to find a passage that was particularly dazzling. Conversely, Stravinsky’s Elegy goes well with a slightly contemplative or nostalgic moment. As for Vaslav Nijinsky, he is always associated with Schumann’s Carnaval. He did dance to this music, and we hear it each time he appears in the series. That infinite tenderness of Schumann’s score is well suited to Nijinsky’s sensitivity. Schumann was also a very talented poet and writer, and it’s my sense that his music tells a story and fits in perfectly with Nijinsky’s voice as he confides in listeners. The idea was that he would make his entrance into the story to the notes of Carnaval, bringing with him all the purity and innocence of his character. I am extremely grateful to those who lent their voices to this series with such talent.

Thank you to Thierry Hellin, Alexandre Tharaud and Stéphanie Van Vyve. And thank you also to the sound editor, Thierry Lequeux.