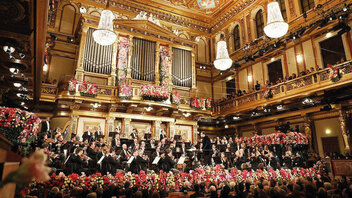 The EBU and the Vienna Philharmonic are pleased to have signed a renewal of their broadcast rights agreement.

The deal will secure access for public-service TV channels to a package of concerts - including the orchestra’s flagship New Year’s Concert, produced annually by the EBU’s Austrian member ORF – until 2027.

EBU Members will continue to broadcast the New Year’s Concert and Summer Night Concert, as well as a Special Concert recorded and produced for them.

The New Year’s Concert enjoyed its best ever viewing figures on 1 January 2021, reaching an average audience of over 22 million viewers across EBU Members’ public-service channels, while the TV audience for the Summer Night Concert in the gardens of the Schönbrunn Palace in Vienna has grown steadily from 1.5 million in 2014 to almost 3 million in 2020.

EBU Media Director Jean Philip De Tender said “The EBU is delighted to be able to continue this partnership with one of the world’s greatest cultural institutions, securing public-service broadcasters’ role as the best platforms for arts and culture.”

The President of the Vienna Philharmonic, Daniel Froschauer, added “The Vienna Philharmonic is grateful for the renewal of the trustful partnership with the European Broadcasting Union and its members, the media home of the Orchestra’s most important concerts produced by its longstanding partner ORF.”

“I am very happy that the partnership between the EBU and the Vienna Philharmonic will be extended,” said Alexander Wrabetz, ORF’s Director General.

“ORF's productions once again furnish evidence of its role as a reliable partner for the arts and culture professionals. They will certainly benefit all those with a love for music: These broadcasts will definitely deliver a brilliant and outstanding viewing and listening pleasure to the audience.”

This year’s Summer Night Concert on 18 June was attended by an audience of 3,000 including individuals that work in the medical profession and education, to thank them for their help during the pandemic.

The 2021 Special Concert this year will be held on 18 September at the Sagrada Familia in Barcelona, produced by RTVE. The Concert will consist of Anton Bruckner’s Symphony No. 4 in E-flat major, whose first performance was by the Vienna Philharmonic on 20th February 1881. The concert will be performed under the baton of maestro Christian Thielemann, renowned expert on the mighty music of Bruckner.

"In public-service broadcasting we’re always looking for innovative ways to introduce culture to new audiences," said Jean Philip De Tender. "By bringing the wonderful music of the Vienna Philharmonic into one of Europe’s most remarkable architectural sites, we’re confident of creating a unique and impactful cultural event.”