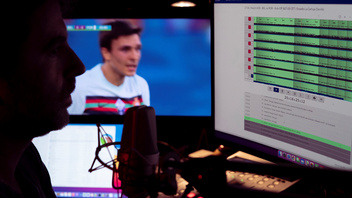 On the eve of the UEFA Euro2020™️ Finals, Christophe Pasquier, Head of Audio & Innovation at Eurovision Sport, writes about how the EBU is helping radio broadcasters capture all the excitement of the tournament. This article was first published in Radio World.

Rewind your memory, if you dare, to March 2020 and the start of the global pandemic. For radio broadcasters, there was a sudden need to adapt to new workflows from their sofas and closets.

But, for one group of resilient and hardy journalists, this transition was relatively painless. Sports commentators have something in their DNA that allows them to easily connect to their studio centres from anywhere in the world and to start broadcasting.

The problem though was that there was nothing for them to commentate on! The UEFA Euro2020™️ tournament was to be the big football event of the year, but that was quickly postponed as nations headed towards local lockdowns.

UEFA Euro2020™️ was set to be the first edition of the tournament to take place across many different countries – an idea conceived back in 2012, in more innocent times, to help celebrate the 60th anniversary of the event.

Football has a remarkable ability to unite nations and to serve as a wonderful distraction in difficult times, something that made its absence in 2020 even more evident.

So, after a long year of waiting, fans collectively breathed a sigh of relief as the first match kicked off in June 2021 at the Stadio OIimpico in Rome.

The tournament, played across different European countries, as originally planned, was to prove challenging for broadcasters dealing with travel restrictions.

The EBU represents and unites broadcasters across Europe and the rest of the world, and around 40 of our radio Members delivered coverage of the tournament to millions of listeners worldwide.

Many of those broadcasters deployed commentary teams to cover matches inside venues throughout Europe, while others decided to work from home, commentating off TV monitors in their studios.

The rights-protected service was delivered over the SRT and WebRTC streaming protocols to provide high quality, reliable and low latency pictures to broadcasters, freeing them from the traditional reliance on expensive satellite downlinks.

Another popular innovation introduced at this tournament was the Eurovision Sport AudioFoot AirCheck platform, designed for EBU radio Members to share near-live emotions.

Football delivers raw and passionate moments that cross language barriers. For example, the Portuguese broadcaster RTP celebrates each and every goal with their iconic “goooaaaal” shouts.

Radio Nacional de España sounds dramatic, punctuating their commentary with music and sound effects. The BBC in the UK and ARD in Germany deliver a considered commentary style.

Yet no broadcaster can hold back their emotions when their team is about to drop out of the tournament or progress through to the finals.

All of these moments, no matter their language, can prove incredibly useful to producers and journalists looking to build a story of a tournament that stretches far beyond their own radio station’s boundaries.

Swiss start-up deliver.media developed a platform, dubbed AirCheck, to provide access to near-live recordings of the audio output from many of our Members.

The platform is unique in its ability to scale using a distributed cloud architecture, currently recording over 240 radio stations. Mathieu Habegger, who established deliver.media, has years of broadcast experience behind him.

He created a simple and efficient user interface that does its best to abstract away all of the technicalities involved in the backend, allowing the producer to mark in, mark out and download any section of audio for use in their own features or live broadcasts.

We worked with the developers to further customise the platform to support the specific needs of sports journalists working in a pressurised environment.

Live sports data was ingested and embedded on to the audio waveform, making it incredibly easy to locate and download goal commentary.

In addition, a player was developed that could sync, display and download audio from multiple broadcasters at any one time.

For broadcasters, it is now incredibly easy to locate a goal from a particular match and to have instant access to the commentary from all of our broadcasters – this makes it so easy for us to reflect the emotions of football across Europe.

It also had some unintended uses. For example, on the second night of the tournament, Denmark’s Christian Eriksen suffered a cardiac arrest on the pitch.

Our Senior Sports Producer Micky Curling was able to locate DR’s highly emotional commentary and make it available to other broadcasters within minutes of the incident. This would have been impossible without the new tool.

The platform also has a flexible data backend that allows users to ingest any type of additional metadata and commentary. deliver.media aims to make linear and audio content searchable in the future and are looking to use AI and deeper audio analysis to really enhance the user experience.

With deliver.media’s AirCheck tool, the innovation from UEFA, and of course the ongoing dedication from radio sports journalists across Europe, UEFA Euro2020™️ proves once again that football is an opportunity for nations to unite and celebrate a shared human experience.

We've used the tool to create some Eurovision-EURO mash-ups. Have a listen to our two finalists, Italy and England!