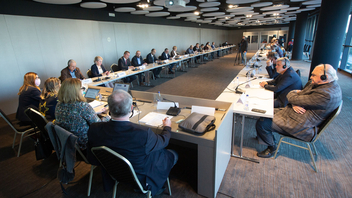 The Montenegrin authorities have withdrawn their proposals to change the funding model for RTCG after protests from the EBU and attendees at a PSM Conference being held in Podgorica yesterday.

Yesterday, the Ministry of Finance of Montenegro announced that they planned to change the funding model for our Member RTCG. Instead of allocating a fixed percentage of GDP (0.3%), they would pay RTCG on a project basis.

The EBU, along with the participants of a regional conference on PSM in the Western Balkans, appealed to authorities to protect the independence of the broadcaster.

The importance of independent funding, detached from political influence, is highlighted in many European standard-setting instruments, notably the PACE Recommendation on PSM Funding 1878 (2009) and constitutes international best practice.

The appeal was adopted by the participants at the ‘Regional Conference on the Separation of Powers among PSM Supervisory Bodies and the Management of PSM in the West Balkans’ organized by the EBU in the framework of an EU funded project for Technical Assistance in the Western Balkans. The participants at the conference included representatives from parliaments, regulatory authorities, civil sector and PSM supervisory bodies in Albania, Bosnia and Herzegovina, Kosovo, North Macedonia, Montenegro and Serbia.

The participants expressed their hope that any future amendments to the PSM legislative and financial framework in Montenegro would be subject to a proper analysis and broad public consultation with the national public broadcaster, civil society and other relevant international organizations.