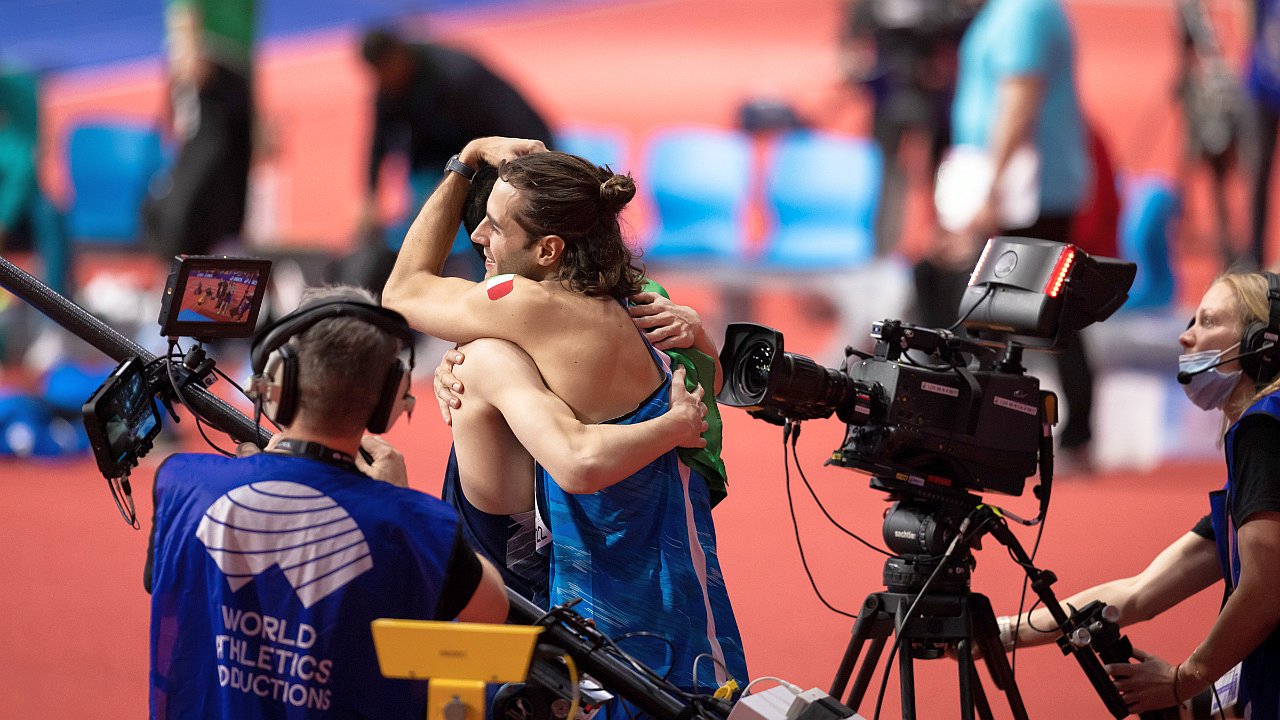 TV viewers across Europe and beyond embraced last weekend’s World Athletics Indoor Championships Belgrade 22, the first edition to be held since 2018 due to delays caused by the COVID-19 pandemic.

25 EBU Members covered the indoor championships in Belgrade, which witnessed some top flight head-to-head competition and culminated on the final day with three world records.

This was the first World Athletics championship event with spectators since the pandemic began in 2020, and more than 20,000 fans attended across the three days, despite a reduced stadium capacity due to COVID restrictions.

The enthusiasm of the spectators was matched by TV viewing figures. Live viewing hours in key markets* increased by 9% from the 2018 championships, and we saw top market shares of almost 33% for YLE in Finland, 34% for Norway’s NRK and 28% for RTS Serbia, where large numbers tuned in to watch Ivana Spanovic-Vuleta win gold in the women’s long jump on the final night.

EBU Members showing the Championships included Ukrainian Member UA:PBC, in a move enabled by the EBU, which has been co-ordinating support for UA:PBC and working, with assistance from Members, to ensure public service media can continue to broadcast and reach Ukrainian citizens, despite the many challenges and risks posed by Russia’s invasion.

World Athletics CEO Jon Ridgeon said: “These are excellent broadcast figures for the World Athletics Indoor Championships, reflecting the exceptional performances and intriguing rivalries that are unfolding in our sport currently. Our fans have been eagerly anticipating the return of major championship stadium athletics and there is a feast coming up for them this year.

“Belgrade provides a brilliant launching pad for our outdoor season which will include four major athletics championships in the space of six weeks, starting with the World Championships Oregon22, then moving on to the World Athletics U20 Championships in Cali, Colombia (August 1-6), the Commonwealth Games in Birmingham (August 2-7) and the European Championships in Munich (August 15-21).

“Thanks to our EBU and European broadcast partners who are playing an integral role in telling the stories of our sport and our athletes to the public.”

Andreas Aristodemou, Head of Summer Sports at Eurovision Sport, said: “The preliminary audience information from some key European markets demonstrates the appeal of top-quality athletics events. This appeal was already evident from the number of European broadcasters covering WIC Belgrade 22 which has increased from the 21 that covered WIC Birmingham in 2018 to 29 today.”

In November 2021, the EBU and World Athletics renewed their long-running media rights agreement, extending and enhancing their partnership for all events in the top-tier World Athletics Series.

Starting in 2024 and running until 2029, the new agreement covers European and African rights on all existing and non-existing platforms, via all distribution modes (albeit the vast majority of coverage will be free-to-air), as well as non-exclusive radio rights.

*Excluding the domestic broadcasters for both events (RTS and BBC), and based on 11 markets (Belgium Flemish, Belgium French, Finland, Greece, Hungary, Italy, Norway, Poland, Slovenia, Spain, Sweden) which have provided data so far for Belgrade 2022. Live hours viewed increased from 25.1 million to 27.3 million.