Three takeaways from the IFC AudioDocs 2022 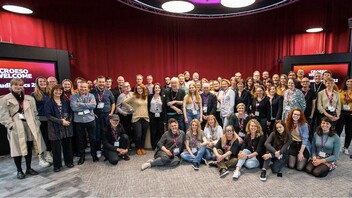 Each year, the International Feature Conference (IFC) brings together documentary makers from across the globe to listen to the best, most innovative and powerful audio pieces. The 2022 edition - IFC AudioDocs - took place in Cardiff, hosted by BBC Wales. During five days, close to 100 people took part in exciting discussions and listening sessions, sharing their experience and exploring new ways in which the art of audio will delight the audiences of the future.

Three years after the last physical edition, this was a fantastic opportunity to gather the community back again and look at new trends in audio storytelling. And it also provided a good basis for some of the talks and meetings that will bring the audio documentary community back in the autumn.

Some of the key people involved in the organization of the event share their thoughts and the pieces they particularly liked.

Abigail Lawrence, Head of Public Engagement, BBC Wales: There feels like there’s a shift to sharing the point of view of those who may not always be given a strong voice or a voice at all. Features such as A Mother Tongue produced by Axel Kacoutié, reflect on culture, language and sense of self, and stimulated a fantastic conversation about the urgent need to address diversity in the industry head-on. I Remember His Look by producer Sigita Vegytė stunned me completely. It’s a story about two people - one guarding a border, the other crossing it illegally. The storytelling and craft moved me and many colleagues to tears. The Nightingales of Berlin produced by Jeremy Grange captures the sound of beautiful birdsong to create an exquisite audio portrait of Germany’s capital.

Edita Kudlacova, Head of Radio, EBU: The IFC brings the best in this field together to share their experience and speak about their work. It was particularly interesting to hear what the new generation brings into the public service media audio work with their very personal and intimate stories and focus on diverse voices, and generally discuss what on-demand listening means for one of the longest traditional radio formats in terms of strategy for production, efficient online promotion of the pieces, topics that include factual narrative and reflection on politics and world around us as well as very personal stories about the hidden inner world of the producer.

Liam O'Brien, Series Producer, RTÉ: In factual storytelling, humour is almost always the most difficult quality to draw out. To find stories with natural humour, or to be able to inject humour into stories which may not obviously lend themselves to a laugh is a really difficult thing... And for that reason The Medieval Feminist produced by Alice McKee was the piece I'll most remember from this year's conference. The approach to the subject matter covered was imaginative and creative and made me both laugh and learn something new at the same time. A winning formula!

3.    In-person events have been missed!

Abigail: It was not only joyful but incredibly moving. Over the course of the conference there was animated conversation, critical debating, dancing, and tears! It was wonderful to be in the company of such a range of extraordinary people, including those with many years of exceptional experience, and those who are new to the craft but have such a bright and blazing career ahead of them.

Liam: It felt so good to be back at an in-person gathering of creative audio makers from all across Europe and beyond. So often what we learn at conferences like IFC comes from the informal chats before and after sessions, the talk over dinner/drinks and through the group sessions when points that may otherwise not be discussed can be drawn out and explored. Whilst virtual got us through the last 24 months, there is no better form of communication than face-to-face!

Our special thanks to the EBU Radio Features Group and to BBC Wales for their incredible work organizing this event. Next year, IFC AudioDocs is heading to Iceland and will be hosted by the Icelandic National Broadcasting Service, from 21 to 25 May 2023. Stay tuned for information in the coming months!