TV audiences across Europe tune in to European Championships Munich 2022 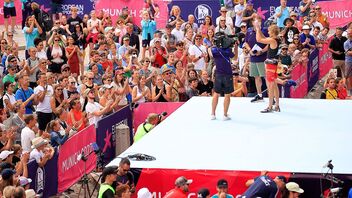 Close to 170 million hours of live coverage of the European Championships Munich 2022 were viewed in the first six days (11-16 August) of the multi-sport event, according to early data from eight key markets.

This represents a significant increase on the first edition of the European Championships in Glasgow and Berlin in 2018 (albeit direct comparisons are not possible because the line-up of sports is different for Munich 2022).

Impressive viewing figures have been recorded by EBU Members for the Munich 2022 sports programme across Europe, including:

The second edition of the European Championships, which runs until 21 August, is receiving in-depth TV, radio, and digital coverage from 40 EBU Members.

More than 3,500 hours of live, delayed, and digital programming has been scheduled across more than 50 channels. This compares with just over 3,000 hours of intentions for the inaugural European Championships Glasgow/Berlin 2018 edition.

Marc Joerg, of rights owner European Championships Management, said: ‘’We are very pleased with the way in which Europe’s free-to-air broadcasters have once again embraced the multi-sport European Championships concept. We still have many more medal events to come over the final few days in Munich, packed into a compelling sports programme, so we hope to continue to see great audiences across the continent enjoying the best of European sport.”

Glen Killane, Executive Director of Eurovision Sport, said: “Sport has the power to unite like nothing else. That unity is more important now than at any time in recent memory.

"These initial viewing figures show how important the commitment of our Members is to the success of this innovative multi-sport event, ensuring that all of Europe gets to share in the success of these fantastic athletes.”

Eurovision Services, an EBU company, is providing services for the distribution of the international signal for the event, making it available across Europe, Asia and the Americas on six separate multilateral feeds. The company is also providing dedicated services to seven EBU members.