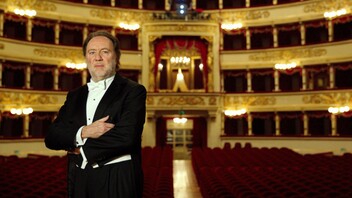 The grand opening night at the Teatro alla Scala in Milan, also known as the ‘Prima della Scala’, is traditionally on 7 December, the day celebrating St Ambrose, the patron saint of Milan. This year again, La Scala Orchestra and Chorus will be conducted by maestro Riccardo Chailly. His first links with Milan’s legendary opera house date back to the time he was an assistant to Claudio Abbado in the 1970s. Chailly was then appointed Music Director of the Teatro alla Scala in January 2017. Ahead of the 2022 opening night, Rai’s Gaia Varon asked the conductor our 3 questions.

Q: As a native from Milan, what is for you the significance of the traditional La Scala opening night on 7 December?

A: The Feast of Sant’Ambrogio (St Ambrose), is a very important day because the world is looking to us through the prism of music. And since 1951, 7 December has been one of the crucial days for the city of Milan because of La Scala tradition. I’m very pleased that this continues and it will be even more amplified by the quality of the production. By this I mean the proposed opera this year and also the media, which will certainly help us to be seen and heard worldwide.

On La Scala’s opening night, one could have imagined that you would present an opera by Verdi, Puccini or Rossini, who are all strongly associated with the history of this opera house. However, this year the programme is Mussorgsky’s Boris Godunov. Why was this work chosen and what are, for you, the most striking aspects of this opera?

Obviously, after having done Verdi and Puccini for several years, it was necessary to consider something different. By staging Boris Godunov after Verdi’s Macbeth (Macbeth was last year’s opening work), we wanted to stress the interesting fil rouge between the two characters, including many of their own tragedies. And I’m very pleased to bring back Boris Godunov for the opening night, after Claudio Abbado had the drive and the courage in 1979 to bring the original version of Mussorgsky’s score to La Scala for the first time.

In addition to Italian broadcaster Rai, the opening night will be broadcast live in more than 12 other countries. How do you consider the importance of public service media for the circulation of opera to a wider audience?

We can say that since the historical staging of Franco Zeffirelli's Otello, sung by Placido Domingo and conducted by Carlos Kleiber, in 1977 [1976, editor’s note], Rai has always been with us on the day. I think it’s a very important partnership – and not only for what it means for Italy and the city of Milan, which has many live broadcast connections. We have thousands and thousands of extra listeners that night, thanks to this connection, including the giant screen in the Galleria [Vittorio Emanuele II], but also worldwide. The opera will be distributed and heard worldwide on 7 December. Of course, it makes us very aware of the exposure, the great emotion, but also the great passion needed to deliver the best we can, and at the same time the joy to let the music world know our own identities in terms of music making, the bravura [skill] of La Scala Orchestra and Chorus and the technical ability to put on a production like Boris Godunov in a new Inszenierung staged by Kasper Holten.

This interview was conducted by Rai’s Gaia Varon at Teatro alla Scala, on 22 November 2022.

La Scala’s Opening Night is offered for broadcast by Rai to all EBU radio organizations, available in MUS under reference EURO/2022-2023/OI/005.