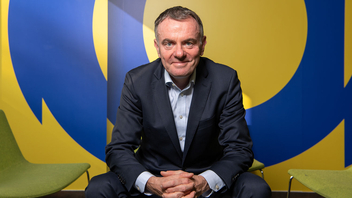 I’m delighted we’ve been able to secure the media rights for the next four editions of the Olympic Games on behalf of our public service media members.

It means we can guarantee everyone, everywhere has access to the sports they love, wherever they are and whenever they want to watch, free-to-air until 2032.

We believe the greatest sporting moments shouldn’t just be available to those that can afford to pay to view. Over two-thirds of sports fans don’t have access to premium sport channels, meaning they’re excluded. And that’s why public service media is the natural home for Olympic sports.

Free-to-air channels reach over 800 million Europeans and connect with audiences everywhere. The next Mondo Duplantis, Femke Bol or David Popovici could be watching in their living room. But if they don’t see it, they won’t aspire to be it.

Our Members’ broadcasts help increase engagement and participation amongst all sectors of society including younger audiences and women who are particularly hard to reach by traditional pay TV.

In our increasingly polarized world, public service media also have a critical role to play in bringing audiences together to enjoy the big national moments.

The values that underpin the Olympic Games are the same as those that have sustained our broadcasters for over 100 years – universality, diversity, solidarity, excellence and innovation.

Viewers and listeners will now be able to enjoy hundreds of hours of coverage on free-to-air television and radio. And, thanks to our pioneering partnership with Warner Bros. Discovery, this deal also means the most committed fans don’t have to miss out on following every step of the action on their dedicated sports channels.

The digital dimensions of this deal are also critical for public service media and for their audiences.

Our Members’ video-on-demand players connect with close to half the population every month in many of our key markets. 90% of EBU Members have dedicated online sports brands providing content in their own languages across web, apps and social media platforms that are followed by tens of millions of people.

All this means that the Olympics will be experienced by more people than ever before, on TV, on radio and on digital. No other media brand can guarantee so much multi-platform exposure to so many people. And this just demonstrates the incredible power of public service media when we all pull together.

The Olympic Games are back where they belong, and we are all committed to working to help shape the future of the Games and together build a better world through sport.