The EBU is deeply concerned to learn that its Member Bosnia and Herzegovinian Radio and Television (BHRT) plans to suspend broadcasting at the end of June due to lack of funding. It would be the first time a public service broadcaster in Europe would be forced to stop broadcasting because of financial difficulties.

This unprecedented announcement means that Bosnia and Herzegovina could become the only European country without an active national public service broadcaster.

The financial situation of BHRT has been deteriorating over many years with an insufficient level of funding caused by the progressive erosion of the licence fee, a weak collection system and substantial payment arrears from regional partner broadcasters Radio-televizije Federacije BiH and Radio-televizije Republike Srpske. Unfortunately, the necessary funding reforms for public service media in Bosnia and Herzegovina have been repeatedly deferred.

The EBU has been actively supporting our Member in Bosnia and Herzegovina to find secure funding over recent years. It has met on several occasions with government representatives to try and come up with a long-term solution for the licence fee and has called upon the European Parliament and the European Commission to support the implementation of EU standards in the media of the country.

Last week, the EBU announced the broadcaster now owed the organization over CHF 6 million. BHRT was unable to fulfill its financial obligations including payment for the rights to the forthcoming European Football Championships. Several unsuccessful attempts have been made to establish a payment plan for the debt.

The EBU had set a deadline of 31 May to try to resolve the financial crisis. In view of last minute attempts to seek a solution, the EBU has decided exceptionally to extend the deadline to Wednesday 8 June, before the start of the European Football Championships.

EBU Director General Ingrid Deltenre said: “We very much hope that the government of Bosnia and Herzegovina recognizes the seriousness of the situation and not only commences the necessary reform of the licence fee, but also takes immediate and urgent measures to allow BHRT to continue operations and pay back its debts.”

She continued: “We believe that a strong public service media is the cornerstone of a stable democracy and key to social cohesion. It is indicative of a state’s freedom and media plurality. We urge the European Commission and the international institutions to back us in calling on the Bosnia Herzegovinian government to come up with a credible and long-term solution to funding public service media in the country and supporting this nascent democracy.” 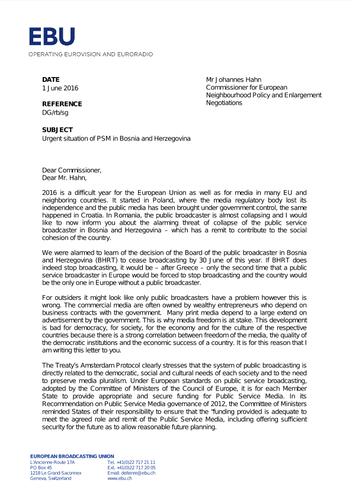