Highlighting the strong correlation between strong PSM and well-functioning democracies in his testimony for the opening panel, Mr. Philippot also warned of the threats to media pluralism and independence that PSM are currently facing, highlighting in particular the political and economic pressures that all too often restrict PSM in fulfilling their mission.

He also underlined the importance for PSM to be present on all platforms, in particular online, in order to ensure an offer of pluralistic and balanced information, aiming to broaden people’s views and counter the ‘filter bubble’ effect. He noted that PSM’s approach to big data, which must be built on accountability and trust, will be key in shaping PSM’s future relationship with audiences.

Mr. Philippot said: “Strong PSM can contribute to build healthy democratic societies. They underpin democratic governance, social cohesion and citizens’ trust in media systems. We need the right conditions to allow PSM to live up to their values and strengthen their contribution to media freedom and democracy.”

The EBU recommendations on media freedom and pluralism address actions to be taken by EU Member States, the EU and industry and civil society.

Member States should respect and ensure the implementation of the Council of Europe recommendations on media freedom and pluralism, in particular regarding the independence, remit and governance of public service media (PSM), the independence of national regulatory authorities, as well as the fight against hate speech and the promotion of a culture of tolerance.

In addition, Member States and EU institutions should make full use of, support and reinforce where appropriate the existing international bodies that help to implement these standards, such as the Council of Europe’s Venice Commission.

The EBU also recommends that the EU treats media freedom and pluralism as transversal principles that can be directly and indirectly influenced by a wide range of policy initiative, from net neutrality and rules applying to the telecoms sector to trade secrets. It is essential to ensure that media freedom and pluralism are taken into account with a cross-sectoral approach.

Furthermore, the EBU would support the introduction of special safeguards for the protection and safety of journalists, investment in training for media professionals with focus on digital media and digital security, and the development on an Erasmus programme for professional journalists.

Within the EBU, the peer-to-peer review process  provides members with in-depth analysis of how they are implementing their core public service values in order to sustain independent, high-quality and trustworthy contribution to a democratic and pluralistic society.  The EBU would be ready to open this process up to other media organizations. 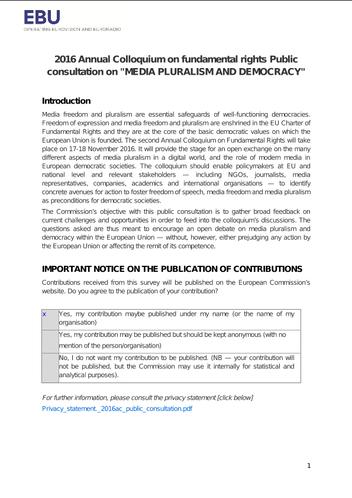