The EBU has reiterated its reservations about a draft law regarding Lithuania’s national public broadcaster LRT.

The law has been submitted, at short notice, for a debate on 11 January by the Seimas ruling majority.

Director General of LRT, Monika Garbaciauskaite-Budriene, has expresseed LRT’s concern about “the significant pressure from the ruling party of Lithuania, which aims to make substantial changes to the Law on LRT...and may have a direct impact on LRT’s independence and at the same time pose serious threats for freedom of speech and democracy on the whole”.

In this situation, the EBU believes it would be better to wait for the judgment of the Constitutional Court or to launch the reform process on a different basis.

“The Law on LRT regulates the activities of a significant institution in a democratic society and needs to guarantee the institutional autonomy and editorial independence of Lithuania’s public service media”, says EBU Director General Noel Curran.

In 2018, the EBU advised that the draft proposal should ensure sufficient safeguards against political influence in the establishment of the new Board which, according to the new draft Law, takes away significant competence from the Council.

The new draft law also introduces an Ombudsman whose duties and responsibilities must be well defined in order to ensure an efficient self-regulatory mechanism that enhances transparency and provides advice to those in charge of management and supervision.

The EBU urges the Lithuanian authorities to take the appropriate measures that guarantee the institutional autonomy and editorial independence of LRT and encourages the Lithuanian authorities to engage in a broad debate on the draft law and invite international media law experts to express their opinion in order to ensure that the law observes best practice and European standards. 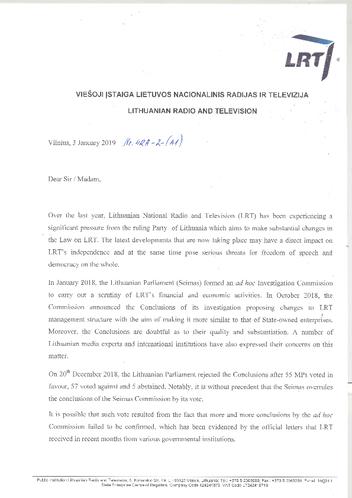 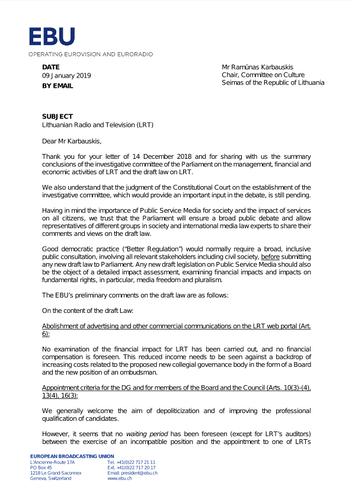