The EBU is concerned about the proposed budget cuts to the Kosovan public broadcaster Radio Television of Kosovo (RTK).

The draft national budget for 2020, approved on the 15 March by an extraordinary session of Parliament, has cut the funding for RTK by Euro 2 million (to Euro 8,960,000).

We believe such a reduction in funding will undermine the public broadcaster's mission to inform, educate and entertain citizens; promote national language, history, culture and traditions; and serve all segments of society, including children and minorities.

The role of public service media (PSM) is even more important at the current time, with the spread of the coronavirus across Europe, when citizens depend on reliable information, educational content and civil security announcements.

Independently of these exceptional circumstances, RTK is obliged by Law to broadcast significant cultural and sporting events, such as the Olympics, which involve large-scale operations, long-term planning and financial security.

Ensuring independent, stable and adequate funding of PSM is the subject of many European instruments, in particular Recommendation 1878 (2009) of the Parliamentary Assembly of the Council of Europe on funding of public service broadcasting requiring “adequate long-term funding” of PSM".

Furthermore, we are also concerned about the requirement for quarterly reporting to the Parliament as provided in Art. 11 p. 10:
“Before each quarter, RTK will submit to the Commission for Budget and Finance at the Assembly, the program of planned expenditures. At the end of each quarter, RTK will submit to the Assembly the report on occurred expenditure. Pursuant to this paragraph, funds are appropriated and transferred by the Treasury to the account at a Commercial bank designated by RTK, according to the decision of Commission for Budget and Finance.”

There is no doubt that RTK should be publicly accountable and responsible for its expenditures and we fully support this obligation. However, quarterly reporting to parliament could lead to judgmental considerations and undue political interference, which would seriously undermine the institutional independence and autonomy of the public broadcaster.

We call on the relevant authorities to reconsider the budget and the reporting to parliament to enable RTK to fulfil its important remit to democracy and society. 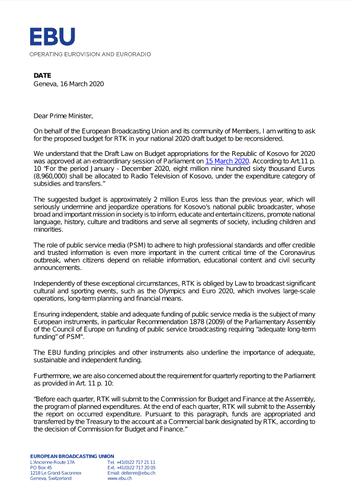