Top pro cycling is back – and EBU Members have it covered 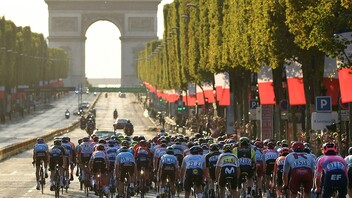 Elite professional road cycling has returned with a bang to France, and EBU Members will this month be offering coverage of three of cycling’s biggest annual events, which were postponed or relocated as a result of the coronavirus pandemic.

All three races, the Critérium du Dauphiné, the UEC Road European Championships and the Tour de France, are expected to attract some of the sport’s biggest stars, eager to get back into action after the lengthy lay-off caused by the lockdown.

The series begins with this week’s 72nd edition of the Critérium du Dauphiné, taking place across five mountainous stages from 12 to 16 August, beginning in Clermont-Ferrand in the Massif Central and finishing in the Alpine ski resort of Megève. At least 10 EBU Members are scheduled to cover the race: TV2 Norway, TV2 Denmark, ITV (UK), NOS (Netherlands), RTBF and VRT (Belgium), RTL/CLT-UFA (Luxembourg), SRG SSR (Switzerland), RAI (Italy) and TVE (Spain). Regarded as a key annual warm-up and indicator of form for the Tour de France, the rescheduling of the race to finish just under two weeks before the start of this year’s rescheduled Tour, means that the Criterium retains this important status in the calendar. The last three winners of the Tour – Egan Bernal, Geraint Thomas and Chris Froome – are set to compete together in the colours of Team Ineos, while other riders sure to be in contention include the Jumbo-Visma team trio of Tom Dumoulin, Primoz Roglic and Steven Kruijswijk, plus French favourites Thibaut Pinot, Warren Barguil, Romain Bardet and Julian Alaphilippe, Colombia’s Nairo Quintana, Rigoberto Uran, Sergio Higuita and Miguel Ángel López, and Spain’s Mikel Landa, Enric Mas, Marc Soler and the veteran Alejandro Valverde.

Eight days after the end of the Critérium du Dauphiné, the relocated 2020 UEC Road European Championships are due to start on 24 August and run until 28 August, with at least nine EBU Members covering the action: NRK (Norway), TV2 Denmark, NOS (Netherlands), VRT (Belgium), France TV, RAI (Italy), ERR (Estonia), TVP (Poland) and RTV Slovakia. The event was switched from its original location of Trentino in Italy to Plouay in the French cycling hotbed of Brittany, after the Italian city elected to postpone its hosting of the event for a year because of the pandemic.

The conclusion of the Road European Championships on 28 August leaves male riders with just enough time to make their way to Nice in the south of France for Stage 1 of this year’s rescheduled Tour de France, cycling’s blue-riband race, beginning on 29 August and finishing on the Champs-Élysées in Paris on 20 September. The EBU will, as always, bring all of the action to fans, with 13 Members gaining access to coverage via Eurovision Sport: TV2 Norway, TV2 Denmark, ITV (UK), NOS (Netherlands), RTBF and VRT (Belgium), RTL/CLT-UFA (Luxembourg), SRG SSR (Switzerland), RAI (Italy), TVE (Spain), RTP (Portugal), RTV Slovakia and RTV Slovenia. Several other EBU Members are accessing the race directly through their own agreements with organiser ASO, or via third parties.

This year’s Tour is expected to be one of the most open and unpredictable races ever, in view of the shortage of build-up races. Organizers plan to implement a ‘bubble’ around the key people involved in the race – riders, team staff, officials and in-race organisation – while fans attending the race will be invited to respect protective and social distancing measures, enforced by a mobile prevention team along the race course and a public awareness campaign. La Course by Le Tour, the UCI Women’s World Tour race due to take place on 29 August, will also be covered by several EBU Members.

Glen Killane, Executive Director of Eurovision Sport, said: “There is so much for cycling fans to look forward to over the next few months and, after a long lay-off, the action cannot come quick enough. On behalf of the EBU Members it is a privilege to partner with the world’s biggest and best cycling events and bring this world-class action back into millions of European households. EBU Members ensure that these events are available for free, bringing huge audiences together on Europe’s most popular and most trusted TV, radio and online platforms.”

The Critérium du Dauphiné, the UEC Road European Championships and the Tour de France are part of a comprehensive line-up of cycling events in the Eurovision Sport rights portfolio, which also includes: UCI World Championships and UEC European Championships in various disciplines; Paris Roubaix; La Flèche Wallonne; Liege Bastogne Liege; Paris Nice; the Tour of Flanders; the Amstel Gold Race; the Clásica San Sebastián; the EuroEyes Cyclassics; the Volta a Catalunya; and the Vuelta a Espana.

Look out for coverage of other top postponed cycling events by EBU Members later in the summer and early autumn.

*With the exception of France and partially in Germany.