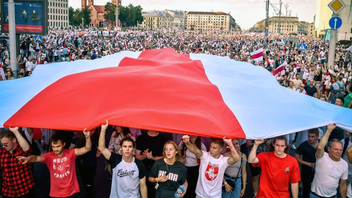 Journalists from Denmark’s DR say they were told the committee deciding on press accreditations have no plans to convene and therefore no accreditations will be given in the foreseeable future.

These new obstacles to independent and impartial reporting in Belarus come after incidents of police brutality, intimidation and arrests as reporters have tried to cover demonstrations in Belarus since the Presidential election. The EBU vigorously condemns these stifling tactics and calls for independent public media to be allowed to do their job.

Manuela Kasper-Claridge, DW's editor-in-chief, said: "It should not be beyond the capability of the Belarusian government to issue or prolong journalists' accreditation, even during the pandemic. The fact is, we are well aware Lukashenko's regime is using the coronavirus as cover to restrict the freedom of press. This must be stopped. The reporting that DW and other independent outlets provide in Belarus is both extremely important to, and highly regarded by, people inside and outside the country. We call upon Belarus' government to make sure foreign journalists can receive their accreditation immediately."

Tarik Kafala, Head of BBC World Service Languages said: "We believe it is vital for the people of Belarus to have access to impartial, independent information about events in their country. We call on the authorities not to impede the work of national and international journalists by withdrawing and restricting accreditation. BBC Russian, which reaches more than five million people a week, has been a major source of news for people in Belarus and Russia during the post-election unrest."

Niels Kvale, Managing Editor, Foreign Desk DR said: “It is always of outmost importance to have journalistic coverage on the ground talking to the Belarussian people and reporting the facts. Therefore it is saddening that the Belarussian government seems to have closed the country for foreign reporters. We therefore urge the competent authorities deciding on press accreditations to convene and look at the applications for accreditations so we again can cover events in Belarus.”