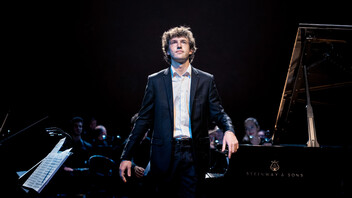 The 23-year-old French pianist Rodolphe Menguy has just won the 2021 Young Soloists Prize of the French-language Public Service Media, awarded by its Music Commission. The Prize consists of a grant of €4,000 as well as a commitment by the participating radio channels (France Musique/FRSRF, Espace 2/CHRTS, Musiq’3/BERTBF and ICI Musique/CASRC) to support the prizewinner in their respective countries.

Chaired by Alex Benjamin (Radio-Canada), the jury was made up of the managers of these classical music stations. A working committee meets twice a year to develop coproductions and arrange for broadcast and concert exchanges,.

Rodolphe Menguy, who is the 15th prizewinner entered by France Musique since the Young Soloists Prize was launched in 1982, talked to us about his artistic path and interests.

Q: The Young Soloists Prize of French-language Public Service Media is just the latest in a string of awards honouring your talent. What does a prize like this mean for you?

Rodolphe Menguy: First of all, it’s an honour that I wasn’t really expecting. France Musique called me two or three weeks ago to tell me that I had been selected as their station’s candidate. It was right at the start of the new lockdown, so I was already really pleased, but to win is even better! Receiving an award like this not only highlights all the work already accomplished, it motivates me to continue and to work even harder. I think that’s all the more significant to me right now given the rather complicated situation we’re in.

Q: Last Saturday, on his popular show “Générations France Musique, le live”, where you’ve already appeared twice, Clément Rochefort congratulated you on your award, noting that you were the 15th candidate by France Musique to  win it since this Prize by French-language public service broadcasters was launched in 1982. What role would you say France Musique has played in your career up till now?

RM: The first time that I played on France Musique was a year and a half ago, in May 2019, for “Générations France Musique, le live”, on a programme devoted to the Philippe Jaroussky Academy, which was established three years ago by [the French countertenor] Philippe Jaroussky. You have to pass an audition to be admitted, and there are four classes: voice, piano, violin and cello. Over a week, you have three big master class sessions, with classes every day for your instrument and chamber music. It’s not only the music connections that I really liked in these sessions, there’s the human aspect as well in working with the professors. And I was lucky to be able to play twice at La Seine Musicale [a concert hall on the Île Séguin, between Boulogne-Billancourt and Sèvres] accompanied by an orchestra. When you’re young and you don’t have all that much experience, especially with an orchestra, it’s just unbelievable, in addition to the teaching, to have that kind of enriching experience.

So I was also fortunate to participate in this broadcast on France Musique with some of my colleagues from the Académie. It was great to have the opportunity to perform together on an important show like that which gave us quite a bit of exposure. Then I was back on France Musique this summer when I played at La Roque d’Anthéron, and once again on "Générations France Musique” in September. I always like playing on France Musique and appreciate the support.  Also, it’s really great for a very practical reason: it allows my family and friends who may not always be able to come to my concerts to hear me play. I have the impression that these shows have a very faithful following, and I understand why because it’s a very high-quality radio station.

Q: Let’s talk about your repertory. The Romantic piece is obvious: Liszt, Chopin, Beethoven. What are some other areas of interest?

RM: I am trying to develop a fairly broad repertory, from Baroque to contemporary music. I don’t want to limit myself to two or three composers like Liszt, Chopin and Beethoven, whom you obviously can’t get around when you’re a pianist. Of course, they wrote fantastic works for piano, and we pianists love to play them, but I try to play a bit of everything.

When I am putting together a recital programme, I try to have a certain variety. I enjoy combining different periods and trying to find connections between the works. A Baroque piece may work surprisingly well alongside some 20th-century music. For instance, right now I’m working on excerpts fom Rameau’s Suite in A, Miroirs by Ravel and the first set of Liszt’s Années de pèlerinage. Now these aren’t unknown works, but I found it interesting to put them on the same programme because they all correspond to the esthetic approach that I was looking for. Naturally, the Rameau wasn’t written for piano, but I think that it relates well to Ravel’s music when you associate the two, from the standpoint of specific tone colours. There is something about the ornaments in Rameau’s music that you can find in Ravel’s piano writing, even if, of course, there are no ornaments in the latter. Then too, there are rather obvious parallels between Liszt and Ravel, both from the way they use the piano and their esthetic approach.

Q: How about contemporary music?

RM: Oh yes, I love it. When I was at the Boulogne-Billancourt Conservatory and only ten years old, I was already very drawn to contemporary music and played it whenever I could. I haven’t yet had any works written specially for me, but I have premiered some pieces.

RM: Yes, I do as much chamber music as I can, although you can never play enough, as far as I’m concerned. There’s so much repertory to explore! And when you’re a pianist, you get to play in all sorts of different combinations. I especially love piano quartets, where all the musicians are more or less equal. If I had to mention one, it would be Fauré’s Quartet No. 2 for Piano and Strings. There are also Brahms’ piano quartets, which are just amazing.

Q: We’re seeing in many countries an ever older audience for classical music. At the same time, public radio broadcasters and organizations like the EBU are increasingly intentional about promoting young talent like yourself, as well as young composers of diversity. Do you think those initiatives are enough to bring a new generation of music-lovers into concert halls?

RM: I think it depends on the venue. When I play at some of the smaller summer festivals, the audience is fairly mixed: locals as well as tourists who saw there was a concert. But you’re right, generally speaking, I’ve noticed that the average age of concert-goers is well above 30! I don’t know what these prejudices against classical music are due to, and quite frankly I have no idea how to change it. Maybe it’s a question of upbringing or getting kids interested in listening to music starting at primary school. I have friends who know nothing at all about music, but after coming to my concerts, they ended up listening to classical music at home. That makes me really happy.

Q: Your rendition of Beethoven’s Sonata, op. 110, at the Festival of La Roque d’Anthéron last August, recorded by France Musique and offered to our Members (ER/2020/34/09), drew lots of praise. If you were a radio producer, what would be the three or four pieces, or work excerpts, that you would add to the broadcast to fill out the programme?

RM: To start off, I thought of Bach’s Chromatic Fantasia and Fugue, BWV 903, followed by the Out of Doors Suite by Bartók, then Haydn’s Variations in F minor, Hob. XVII:6, and, to finish off, Beethoven’s op. 110 – in that order. These are all composers who relate to each other. Bartók was greatly inspired by Beethoven’s music. While his writing was very innovative, he came out of the whole tradition of Germanic composers, including Bach. In the op. 110, there’s a big fugue that calls to mind Bach, and in the Adagio, Beethoven even quotes Bach. As for Haydn, Beethoven dedicated his First Piano Sonata to him. As far as key signatures go, the Fantasia and Fugue is in D minor, while in the Bartók, the pivot note is D, then F. Haydn’s Variations are in F minor, which is the relative of A flat major, the key of op. 110.

Q: It’s probably difficult to speak about engagements at the moment, but what are your plans for later in 2021?

RM: In March, I have a recital with the works by Rameau, Liszt and Ravel that I mentioned previously. Next summer, I have solo concerts with various programmes, with one devoted to Hungarian music (Liszt, Bartók and Kodály), and another around Bach. I will play chamber music for piano, violin and clarinet with Sarah Jegou and Joséphine Besançon. We’ll be doing Contrasts by Bartók, which is a fantastic piece. I also have a programme with viola with my friend Nicolas Garrigues. Finally, I’ve got a project with an organist friend, Quentin Guérillot, which I’m really excited about. There’s a wonderful repertory for piano and organ, not at all well known, mainly for logistical reasons, I suspect!