Public service media in the Czech Republic under threat 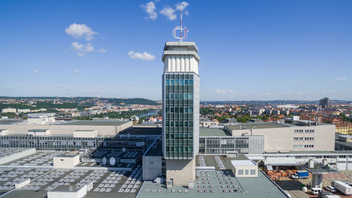 Across Europe, an increasing number of governments are trying to silence opposition voices by restricting freedom of the press and exerting undue influence on public service media.

In the latest example, the independence of Czech Television is under threat. In recent months, we’ve seen the increasing politicisation of its governing body and attempts to challenge and undermine the senior management team.

We are concerned that the shortlist for the next Council election on 13 April features only candidates with political affiliations to the ruling party.

Ahead of the elections, our President Delphine Ernotte Cunci and Director General Noel Curran have written to Czech Parliamentarians to urge them to protect the independence of the broadcaster so it can remain a model for public broadcasting in the Czech Republic and across the continent.

In this op-ed they write about the importance of protecting media pluralism in these still-young democracies.

There is a rich variety among the public-service media organizations that belong to the European Broadcasting Union, but public-service media shares a common mission and value system – to represent fairly the equally rich variety of opinions, cultures and communities that make up their different nations. It is a mission that is coming under increasing pressure in some European countries.

This duty to reflect and record the interests of the entire audience is not universally accepted, particularly politically. Across Europe, we have seen more and more governments who want to limit the voices that we hear and restrict those that would bring those voices to our ears.

The latest example is in the Czech Republic where the national PSM broadcaster Česká Televize [CT], has been under increasing political pressure. Data from the Reuters Institute for the Study of Journalism in Oxford shows that CT is the most used news brand in the Czech Republic, with 60% of everyone in the country using the service at least weekly. CT is also trusted by more Czechs than any other news brand.

That trust is a testament to the independence that Czech TV has shown in its approach to its news and current affairs responsibilities.

Yet in recent months, it has become alarmingly clear that the Czech Republic’s government is trying to exert pressure on that very independence, directly and indirectly.

In 2020, an election of members of the broadcaster’s governing council provoked debate when mainly people with known links to the governing party were put on the shortlist. This year, the government appears to be seeking to cement its grip on the council with another shortlist of candidates on which only its supporters appear.

The aim appears to be the removal of the widely-admired CEO of CT, Petr Dvořák, who is also the vice-president of the EBU.

CT has been an active member of the EBU committed to its core values. Independence is at the heart of those values, enshrined in Council of Europe resolutions which among other things strongly recommend electing governing bodies that protect broadcasters from political interference.

In the case of Mr Dvořák, he was subjected only recently to a vote of no confidence which he narrowly survived. With general elections due in October, the EBU believes that the new effort to weight the CT governing council in favour of the state’s government is a final effort to oust the CEO and establish a pliant CT in time for campaigns to begin in the autumn.

The International Press Institute and other media organizations have also expressed serious concerns at the political interference and growing pressures on CT.

But in the Czech Republic, we are seeing increasing confrontation directed by the Council towards CT management and other signs of increasing politicisation of the governing body. The last time that the government moved to impose its will on CT, there were demonstrations on Czech streets. Now, in the grip of another wave of Covid, such protests can be dispersed under the guise of imposing social distancing.

So it may be that only pressure from outside will preserve the hard-won independence of a public-service broadcaster that is crucial – as are all PSMs - to the democratic future of a nation often seen as a bulwark against authoritarianism in central and eastern Europe.

For the good of the still-young democracies of countries that were unable to tell the truth to their populations while under the influence of the Soviet Union for many painful years, it is vital that PSMs such as CT should be allowed independence. It is their job to inform and educate and entertain all the people who rely on them and trust them. It is our job to protect them while they do so.