Writing the first drafts of history. The birth of the Eurovision News Exchange 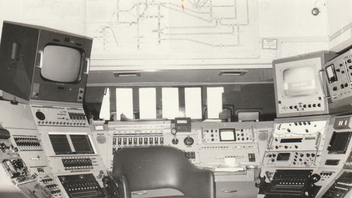 News is the world ‘talking to itself’. News media shape our lives. Broadcasting and internet are the keystones of the news media, today, always and everywhere, available at light speed.  The EBU’s Eurovision News Exchange (EVN) has been, and remains, a key enabler of international trusted news. 2021 marks the 60th Anniversary of a significant milestone for the EVN.  Following trials in the 1950s, in 1961 the EBU Television Programme Committee recommended that the EVN continue permanently.

The EVN story is about ancestors with determination and vision - and progress in media technology.

The days before the EVN

Step back for a moment to the 1950s. News cameramen shoot 16mm black-and-white film, rush to their home studio to develop the film, and then someone bounds to an airport or train to bring the aluminium cans to other broadcasters.

“Due to Fog, No Foreign News Today”

Such an on-screen caption by European broadcasters is entirely possible in the post war years. If the aeroplane carrying the film cannot get through, no matter how dramatic the story is, the news must wait.

Back in the 1920s, the EBU’s (then called IBU) first Secretary General, Arthur Burrows, predicted that if nations could see what news for others was, and how others lived, it would engender peace and understanding. During the later 1950s, that dream came closer to being realized with Eurovision and the formative steps toward what we now call the Eurovision News Exchange.

The early 1950s saw the establishment of the technical interconnection network linking up major European broadcasters’ studios with cables or microwave links that could carry vision and sound when called upon. This network was later called ‘Eurovision’. It was used to carry moving images of live events to European viewers.

The founder, in the latter 1950s, of the idea of a Eurovision News Exchange was Netherlands Broadcasting (then NTS, today NOS). Just after starting television news broadcasts in 1956, they conceive the idea of an international electronic news exchange.  They ask why filmed news stories, played out by one broadcaster into the recently established Eurovision network, could not be re-recorded on film (“tele-recording”) by recipient broadcasters, and then used for their own national news? In this way, fog-or-no-fog, rapidly and surely, the news would get through.

Would the quality of the images that the viewer would eventually see after such multiple steps be good enough? A test, shot at the Tour de France, shows that Dutch journalists could still recognise Dutch cyclists in the race. Great news - the technology can work!

The first meetings and experiments

Delegates from 17 Members and EBU engineers – we could call them the EVN Founders – met in 1957 to discuss the possibility of an exchange of news via Eurovision. Later in the year, in true EBU style, a questionnaire was sent to EBU Members to understand the kind of news services EBU Members offered at that time. The results reinforce the value of news for EBU Members.

In April 1958, a first news exchange experiment for October 1958 is agreed. Inevitably there are bumps in the road. ARD and ITN cannot participate for different reasons. The World’s Fair in Belgium at that time means pressures on equipment.  In the second week of the trial period there is football, which will tie-up equipment and the network.

But the trial does take place and is successful - editorially and technically. Carel Enkalaar from NTS is the News Coordinator, working at the Eurovision Control facilities at the Palais de Justice in Brussels. The ‘top news’ that week is the death of Pope Pius XII.

The trial shows what can be done, and a second trial is recommended for March 1959, though it’s later moved to May 1959 to accommodate ARD.

The meetings go on, tackling the ‘delicate question’ – relations with News Agencies.

In June 1959, after the second trial, which included a daily news exchange, is seen as a great success, the sub-group of News Editors unanimously recommends a regular news exchange should be organized “as soon as possible”.

The pieces of the jigsaw come together

From Autumn 1959 through 1960 there are multiple meetings to agree everything needed to make a regular news exchange practical. What equipment is needed? What staff are needed? What costs are involved?  How should costs be shared? How to arrange access for third parties?  Five EBU Members (NIR, NTS, RAI, RTT and BBC) share experimental regular news transmissions. There is disagreement about whether the News Coordinator should be located at the EBU in Brussels alongside the Eurovision engineers, or at the EBU Headquarters and Administrative Office in Geneva. Finally, it is decided that he or she should work from Geneva.

In March 1961, a five-month trial begins with a monthly rota of News Coordinators (from Members) and a permanent Traffic Manager. The trial period is extended until September 1961. Most notable, the EBU Television Committee meets in September 1961. It discusses costs and cost sharing.  Importantly, it unanimously agrees that the news transmission experiment was indeed a “good idea”, and it recommends continuation, improvement, extension, and expansion of the transmissions. A longer seven-day week operation is recommended to start from January 1962. The EVN ship is launched.

From that time, for the next 60 years, the Eurovision News Exchange has served the broadcasters and citizens of Europe and much of the rest of the world. It has held up a mirror for us, in the good times and the bad times, providing trusted, independent and accurate coverage of the world’s major breaking news stories. We can truly say that the EVN has helped write the first drafts of our history.