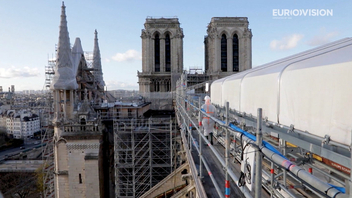 France Télévisions (FT) has been awarded the 2021 Gunnar Høidahl Award for Excellence in the Eurovision News Exchange (EVN). The award was presented at the 16th News Assembly by veteran news journalist, Gunnar Høidahl, who attended in person to mark the EVN’s 60th anniversary year.

Høidahl said, “My warmest congratulations go to France Télévisions for being chosen as the winner of the Gunnar Høidahl Award this year. At the 60th anniversary of the Eurovision News Exchange it is more important than ever to uphold the principles of free and fair reporting of what takes place in Europe and the rest of the world. The News Exchange is an excellent tool to achieve this goal and I wish you and the other Members the best of luck in upholding and steadily improving this tradition. You have shown that the News Exchange matters amidst all efforts from various sources to confuse and mislead people all over the world.”

The prize was accepted by Colette Zagaroli, International Exchange Journalist at FT. “I am very touched to learn today that the Gunnar Høidahl Award has been awarded to the France Télévisions Group…It is an honour for us that our participation in the EBU has been rewarded by the entire editorial staff in Geneva. I would also like to thank you because I’m very lucky to work for this beautiful idea of sharing between public channels.”

The Gunnar Høidahl prize is awarded annually at the News Assembly. Nominees are put forward by the EBU's Geneva news editors and the winner is selected by the entire EVN team.

The shortlist for 2021 comprised FT, RTVE (Spain), who won the award in 2020, and LRT (Lithuania). Each was singled out for their commitment to quality; dedication to serving the requirements of the EVN; and ability to react swiftly to changing situations and deliver on major stories. Stand-out news coverage gaining special mention included the bringing down by Belarus of a Ryanair flight heading for Lithuania (LRT); the eruption of a volcano in La Palma (RTVE); and FT’s excellent foreign coverage, particularly in the aftermath of the Taliban takeover of Afghanistan where their contributions were described as “invaluable” by the Eurovision news team.

Emilio San Pedro, Senior Editor, Eurovision News Exchange, said “While the COVID-19 pandemic and its repercussions have continued to make headlines into 2021, some of the biggest news stories have been around issues of media freedom, threats to journalist safety and the security of the world we live in, from the Biden-Putin summit to the Afghanistan evacuation to the climate crisis. Thanks to our Members and the hard work of our team, the Eurovision News Exchange continues to defy challenging circumstances and share the stories that matter, with unparalleled access to places and people. With such stiff competition, it was truly hard to pick an overall winner, but my congratulations to France Télévisions – very well deserved.”

The Eurovision News Exchange marked its 60th anniversary on 28 September 2021. This unique network, founded by European public service media newsrooms, operates in more than 50 countries and offers EBU Members around 100 edited news, radio and sports items, as well as almost 17 hours of live content, every day. It also enables Members to confidently use essential eyewitness reports as news stories unfold, knowing they have been verified by the Social Newswire service and that the content is trusted, safe to use and to share.