“Climate journalism is definitely a way to attract talent...” 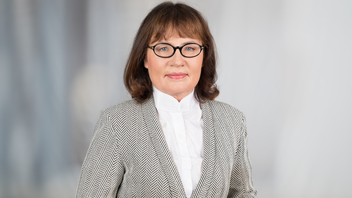 In the context of all your news coverage, how much weight does climate coverage have?

It is extremely important and it is becoming increasingly urgent. It affects all the regions we cover; it is the defining issue of our time. Current conflicts around the world will hopefully end at some point, but the climate crisis and its effects will last forever.

Is this particular to Deutsche Welle because of your global outreach?

It has something to do with our mission and reach, of course. We see lots of droughts in Kenya and in Arabic-speaking North Africa, elsewhere there is extreme flooding like 2022 in Pakistan and quite often in Bangladesh. Our users comment on this a lot. People didn’t always connect it to the climate crisis, but now they do so more often than they used to. Everybody knows about it. Everybody feels it. In Europe interest grew with the 2015 climate conference COP21 in Paris. The dramatic facts that were presented caught people's attention. Deutsche Welle started more intense coverage much earlier though.

I developed an environmental format, Global Ideas, 12 years ago. The idea was to create an all-inclusive package of multimedia journalism and education materials to highlight best practice projects and solutions to fighting climate change around the world. Also, we wanted to inspire others to take action as well. Together with the team I received many awards for it. It is now translated into six or seven languages. One of the decisive factors was definitely: I don’t come from political journalism but from environmental journalism, business, and science journalism. This allowed for further journalistic perspectives beyond the well-known political one.

Is this why you were chosen as Editor-In-Chief?

Newsrooms tend to complain that people demand environmental coverage, but they don’t consume it that much. How successful are you in attracting audiences?

Our social media formats are very successful, as well as our TV formats in cooperation with regional partners like our series “Eco Africa,” which has since been adapted to markets in six countries. We do have Eco Africa nowadays in French, Portuguese, English, Hindi, Tamil and Brazilian. Written articles, particularly explainers, work well too. Instagram and TikTok are getting ever more important.

What do you know about your “heavy users”?

Young and female users are very engaged with the topic. In Africa you have lots of women who are interested, they feel the effects very drastically, they are looking for solutions. In Asia also women are very dedicated consumers of DW climate coverage. Across the globe young people are very interested. In fact, when people apply for a job at DW, they often quote our environmental coverage as the reason why they chose us. We have trainees from all parts of the world.

So, great climate journalism is a recruitment tool?

Climate journalism is definitely a way to attract talent. People keep telling me: If an organization produces something like that, I would like to work there.

What kind of journalism works best?

Solutions-based journalism. The topic is often depressing and negative, people can only bear that much of it. So, we are looking for people who are doing something to make things more sustainable. Audiences appreciate that. Explainer video formats work very well too. They shouldn’t be too complicated though but tell people: What does it mean for me? We have this very successful format, Planet A, meaning, there is only one planet. It is dedicated to young users. In it some of our younger reporters explain and even go out and experience things such as how carbon offsets don't work as we are told and how fast fashion is poisoning holy rivers in India. We had 36 million video views in the first 1.5 years. We have just started a new channel on TikTok under the label Planet A.

What doesn’t work at all?

I cannot remember a real failure. Of course, some videos work better than others. Planet A grew slowly for the better part of the first year, then suddenly it took off. It takes patience, it wasn’t easy to get it right. We personalised it more, put more people in front of the camera, made it a bit more entertaining.

Do you treat climate journalism predominantly as a science topic, a business topic, or a political topic?

It encompasses all departments because all of society is affected. It demands a cooperation from all desks: business, science, even culture. 60 colleagues work on our environment desk, we have increased headcount there. But we have climate correspondents in other departments as well. We are doing much more cross-over work. Very often, the environment desk or the politics desk are in charge, but also regional desks, depending on where the how and where the story is playing out.

You mentioned “Eco Africa”: Do you often create formats centrally and then adapt them to certain regions and cultures, or do you craft most things for a particular market or audience?

It is not that one size fits all. Asia, for example, has their own problems and issues that don’t always translate to those in Africa. Of course, the climate crisis is a global topic, but you often have to focus stories on one region and one audience. And then see what gets the most positive feedback.

How do you go about it?

These stories don’t work in an abstract way. Our reporters and editors come up with ideas, look at the comments and the news agenda, then we discuss. We also make sure we are meeting the needs of our users. We interview users regularly to get their opinions. We also have correspondents who are on the ground and we have partners who know the regions very well. We try to be as close to our audience as possible. It is not a good idea to decide about the topics while sitting at your desk in Europe and then develop a story in Africa top down. Good stories need constant interaction.

Are you personally involved in these discussions?

It depends on the format and scale. In the bigger things I get involved.

How would you rate Deutsche Welle’s performance in climate reporting in total?

There is always room for improvement. We need more continuity. When there is news like the war in Ukraine, then you tend to shift focus away from the climate crisis...

Has the war helped or hurt climate coverage? There is a big debate on energy security after all.

It hasn’t helped, but the topic wasn’t entirely lost, since we had this really hot summer with fires and flooding at the same time as the war. The war shifted the conversation on energy but not exactly to environmentally friendly energy.

What is the most difficult thing about climate reporting?

It is too depressing. Where is the positive news? That’s why we try to package things differently, emphasizing solutions no matter what the scale.

It is not the politics surrounding the topic? Media are often accused of being activist and biased for a green political movement if they focus on climate journalism.

All our journalists know the difference between activism and journalism. This is very important.

What about internal resistance?

Maybe there is some, but not that I know of. I think everyone realises the topic is a huge issue, but as journalists we will always have discussions on what aspects we should focus on more.

Do you have a stylebook on climate coverage like the Guardian?

We have reporting guidelines, published by the Editor-In-Chief and environment department. We aim to be clear, precise, convey urgency. We use the present tense, talk about the climate crises. A no go with us is apocalyptic language. But the guidelines are there to help, not to control. I don’t police them.

We don’t have visual guidelines. We probably should. You often see these apocalyptic scenes; you don't always need that.

What are your next steps?

We will focus more on background, more on explanatory reporting. Additionally, we want to continue increasing our outreach and dialogue with younger users.

Does your organization measure its own carbon footprint?

We publish a sustainability report every two years. We are aiming at a reduction of CO2 of 30 percent over 2019 levels by 2030. So far, we are on track. We are reducing plane travel, improving energy efficiency and re-examine our supply chain. We measure the carbon footprint of our film productions. We want to be climate neutral by 2045.