Generation What - Young People and Optimism - A Pan-European View

Engaging with youngsters is a challenge all institutions face today, whether it be politics, education, media or other. An impossible task some say. Therefore the European Broadcasting Union is proud to have brought together 18 Members in 14 countries for the Generation What project which launched in April 2016 and gave a voice to this generation, a generation with a optimistic perspective of the future, as it turns out.

Since then nearly a million young people have been given the opportunity by public service media (PSM) to speak up and to be heard. This “millennial” generation will, in the near future, be responsible for our continent so it is valuable to hear their voice and learn from what the survey has revealed.

Public service media is not just listening though but providing a platform to build bridges, not just between generations but between citizens and the institutions that influence their lives. Generation What shall be the start of an increased dialogue between young people in the various countries, institutions, governments and the EU.

The project, that could only be delivered by public service media and the connection it has with its audiences is, once again, underlining the great value of PSM for society. Generation What has not just been a huge success in our participating Member countries but has reached young people in 35 different territories in total.

This report brings together some of the learnings from the survey to better understand how young people feel about their position in the world and their hopes for our common future. 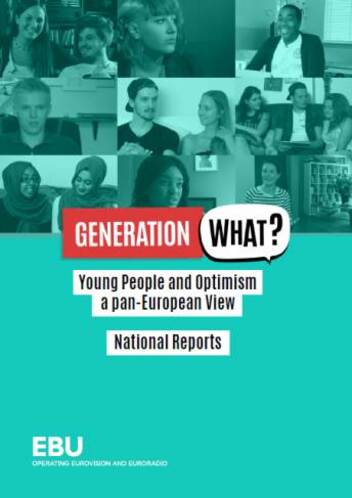