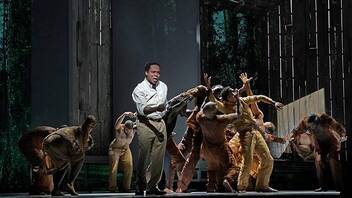 Blanchard's "Fire Shup Up in My Bones" at the Metropolitan Opera of New York, one of the many Euroradio Season events

The Euroradio Season is made up of series of predominantly live concerts and operas that are offered by Members, Associates and Approved Participants, curated by experts from within the EBU community, and broadcast each year from mid-September to mid-June. The objective is to give special attention to the highest quality music events from across the EBU membership.

The Season contains the following series:

Headline events in the musical season of a given hall or city are hand-picked for inclusion in this series and broadcast live whenever possible.

These are world-class productions offered by EBU broadcasters. As well as a general series that features individual productions from across the Membership, three special series are put together from the Vienna State Opera, the Royal Opera House in Covent Garden, London, and principal opera houses in Italy, respectively.

The live relay of the Met's Saturday matinees from Lincoln Center in New York, every Saturday evening in Europe from December to late spring the following year.

A series devoted to young performers under 30 at the beginning of their international career.

These are the Christmas Music Day and Holy Week Music series, in which specially themed concerts are curated and sequenced for broadcast ahead of Christmas and Easter respectively.

In years featuring major anniversaries or other significant events, like the Beethoven 250 celebrations, special one-off series are also created.

Year of production
Every year