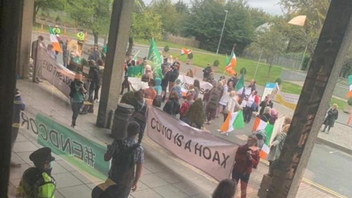 The EBU is concerned by the growing level of intimidation and aggression directed at journalists and production crews. As we mark International Day to End Impunity for Crimes Against Journalists, our Members are reporting an increasing amount of hostility and even violence levelled against them.

NOS in the Netherlands have been forced to remove all the branding from their satellite trucks as they were encountering threats and intimidation with people jumping onto the vehicles and cutting cables.

While this is not entirely without precedent - several other broadcasters have similar policies - the scale of the aggression has increased markedly in the last few months and years.

SVT’s security costs have increased fourfold in the last five years – much of which is for personal protection. On average the Swedish broadcaster is handling 35 security issues every day – including harassment, acts of violence and threats, both physical and online.

Other Members such as RTE in Ireland have seen coronavirus-related protests outside their building in recent months with staff being prevented from entering or leaving the offices.

And Members from across the continent have been receiving threatening correspondence – often sent to home addresses. Many broadcasters, such as DR in Denmark, make journalists’ email addresses freely available for accountability but they are often abused by people sending malicious content.

Journalists and executives at Slovenia’s public broadcaster RTVSlo have also been the target of online smears and abuse, not only by members of the public, but by right-wing media outlets and, on some occasions, prominent politicians.

This is in line with a new UNESCO report, published to mark the International Day to End Impunity for Crimes Against Journalists, which shows that, while journalist casualties in areas of armed conflict declined in 2019, fatal attacks on journalists in other areas has increased. The proportion of journalists being killed in countries with no armed conflict increased from 50% in 2016 to 61% last year. A fact they suggest could be due to 'increasing intolerance towards reporting, fostered by a climate of endemic anti-press rhetoric, including by political leaders' as well as the influence of corruption and organized crime.

EBU Head of News Liz Corbin said: “It is completely unacceptable that journalists going about their job are subject to this level of abuse and threats of violence.

“Our Members play a critical role in providing the public with trusted news and information, which has been powerfully demonstrated during the ongoing global pandemic.

“Journalism is under attack. We call on national authorities to do all in their power to protect the media so they can continue to provide a vital service to society during these critical times.”