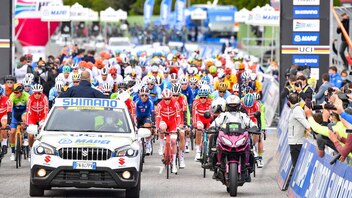 This year’s centenary of the UCI Road World Championships, being held in Flanders, Belgium to celebrate the region’s historic role in competitive cycling in Europe, will be televised widely across Europe and beyond, thanks to media distribution by Eurovision Sport in Europe, and by IMG in the rest of the world.

Through media distribution by Eurovision Sport, EBU Members’ coverage will be backed by Eurosport/Discovery platforms, with full coverage on Eurosport 1, plus full digital coverage on Eurosport Player and Global Cycling Network throughout Europe. There will also be coverage of the competition in Russia on Match TV through a sub-licensing agreement with Eurosport.

Meanwhile, IMG has ensured that the 2021 UCI Road World Championships will have widespread coverage across the rest of the world. In the Americas, Flosports and ESPN will distribute the images. Jsports (Japan), Zhibo TV (China), Truevision, Mono (Thailand), Astro (Malaysia) and Starhub (Singapore) will also broadcast the Championships in Asia, along with SBS and Fox Sport (Australia), Sky Sport (New Zealand) and Supersport (South Africa).

In total, the 2021 UCI Road World Championships will be televised on all five continents.

VRT/Sporza, in partnership with Eurovision Sport and the UCI, will act as host broadcaster of the event, ensuring that not a single minute of the action during the eight days of the event is missed.

Frederic Sanz, Head of Cycling at Eurovision Sport, said today: “Our Members and partner broadcasters are embracing cycling in an unparalleled way. For the centenary of the UCI Road World Championships, it was very important to offer this extended coverage throughout Europe, reaching not only dedicated cycling fans but the wider viewing public. By ensuring the highest possible value for the UCI, the Organizing Committee and the various stakeholders, Eurovision Sport once again underlines its credo: ‘connecting people to sport and sport to the people’.”

UCI President David Lappartient said: “The UCI Road World Championships, our leading annual event, are particularly special this year as we are celebrating their 100th anniversary. While the television audiences continue to grow every year, it is especially important to us that fans worldwide have the opportunity to be part of this incredible 2021 Centenary event. I am delighted that Eurovision Sport and IMG will ensure that the racing in Flanders can be followed by enthusiasts in all corners of the globe.”

Ed Mallaburn, SVP Head of Sport at IMG Media, “The widespread distribution outside of Europe helps prove the importance of the UCI World Championships globally and we are delighted to work with the UCI and Eurovision Sport on this prestigious event.”

In April 2016, the EBU was awarded the European media rights to the UCI World Championships for the next eight years, while IMG, operating under EBU sub-licence, handles the rights outside Europe.

Free-to-air channels reach over 800 million Europeans, leading to increased engagement in sport, a greater audience reach and better value for sponsors, according to a new report, commissioned by the EBU from Ampere Analysis (Sports on European TV: Maximising Commercial Value).