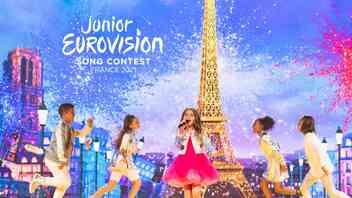 The European Broadcasting Union (EBU) and France Télévisions are excited to announce that France will host the Junior Eurovision Song Contest (JESC) in 2021 following their first win in the competition on 29 November.

“We are delighted that France Télévisions will host the Junior Eurovision Song Contest next year for the first time,” said Martin Österdahl, the Contest’s Executive Supervisor.

Delphine Ernotte Cunci, president of France Télévisions and EBU President-elect added: "I am very happy that France Télévisions is organizing the Junior Eurovision Song Contest in France in 2021. Valentina represented our country brilliantly by winning the 2020 edition. Consequently, it was obvious to host the next event in our country.

“This is a strong new initiative for us, which underscores the importance France Télévisions attaches to Eurovision, the EBU and Europe. Let us all hope that Eurovision 2021 can take place under normal conditions in France and it will be a time of great celebrations for many Europeans.”

"29 November 2020 will always be engraved in our memories thanks to Valentina's magnificent victory at the Junior Eurovision Song Contest, said Alexandra Redde-Amiel, France Télévisions head of variety and entertainment and Head of Delegation at the JESC.

“This incredible adventure isn’t over! It truly is an achievement and an honour for the entire France Télévisions entertainment team to organize one of the biggest shows in the world in France. We can't wait to welcome the EBU teams, all the participants and the European delegations next year and offer them a special show!”

The host city and venue for next year’s Contest will be decided at a later date.

Winner France recorded its best audience ever. An average of 1.2 million viewers watched on France 2, up 23% on 2019’s audience.

For a second year in a row the highest average TV audience was delivered by hosts Poland, with 5.1 million viewers.

The Contest has also been viewed over half a million times to date on the official YouTube channel.

The 18th Junior Eurovision Song Contest delivered an 6.9% viewing share, up 25% on the average normally achieved by the same group of broadcast channels of 5.5%.

Instagram followers increased 32.5% during the event week, and more people engaged with content than ever before on the channel. There were just under 4 million unique views on Instagram stories. Content from the event made 3.5 million impressions on Twitter and reached over 2m unique users on Facebook. Junioreurovision.tv was visited by nearly 900.000 unique users during the week of the event who browsed over 3 million pages.

*Across 11 markets with available data
Source: EBU based on Glance / Relevant Partners.